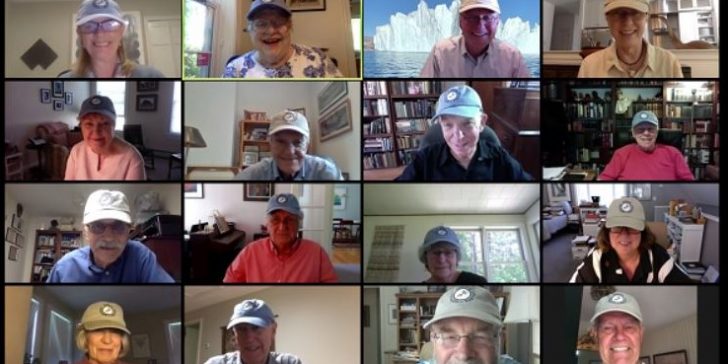 PHOTO: Midcoast Senior College will have a mix of in-person and Zoom classes in 2022-23. (Submitted photo)

BRUNSWICK — Midcoast Senior College members have elected new officers and appointed new board members for 2022-23 as it enters an era of both returning to in-person classes as well as integrating Zoom permanently.
Jay Kuder is the new president, Karen Williams is vice-president, Leona Dufour is secretary, and Erv Snyder is treasurer.
Kruder earned an Ed.D. from Boston University and taught in the Department of Interdisciplinary and Inclusive Education at Rowan University in Glassboro, New Jersey. He has published on the subject of the education of autistic and other developmentally challenged students. He and his wife live in Topsham.
New board members are Rufus E. Brown, Kevin Hart, David Vogt and Susan F. Goran.
Brown is a graduate of the University of Maine and Georgetown University Law School. He spent his career practicing law in Portland and also worked in the Maine’s attorney general’s office. He and his wife live in Georgetown.
Goran has held nursing positions throughout Maine and New England and is an adjunct faculty member at New England School of Nursing and Population Health in Portland, and lives with her husband in Freeport.
Hart holds a law degree from Syracuse University, as well as a Ph.D. in Health Economics and Policy from the University of Rochester, where he taught. He moved to Brunswick in 2009, with his late wife.
Vogt is a graduate of Colby College and holds an MBA from Harvard Business School, and has spent 12 years teaching film-making and curriculum development and 28 years in technical and general management positions in the international semi-conductor industry. He and his wife live in Falmouth.
MSC over the past year found a significant number of Midcoast students prefer Zoom, particularly those who have difficulty getting out. The college will continue to hold classes on Zoom, while also reinstating in-person classes and other activities. A variety of venues will be used for in-person classes, including University of Maine Augusta at Brunswick Landing, Curtis Memorial Library, St. Paul’s Episcopal Church and MSC administrative office. This spring, MSC experimented with a hybrid class that included both students in a UMA classroom a Brunswick Landing “smart room,” which means it can connect with students on Zoom as well as accommodate students in the classroom.
The college is seeking volunteers to help with Zoom hosting. The co-host assists the instructor in the technical aspects of online classes. They don’t have to be computer experts, but simply proficient in computer functions. They also are members of the class, who do not have to pay tuition for the class they co-host.
Those interested in co-hosting should contact Executive Director Diane Marshall at midcoastseniorcollege.org.