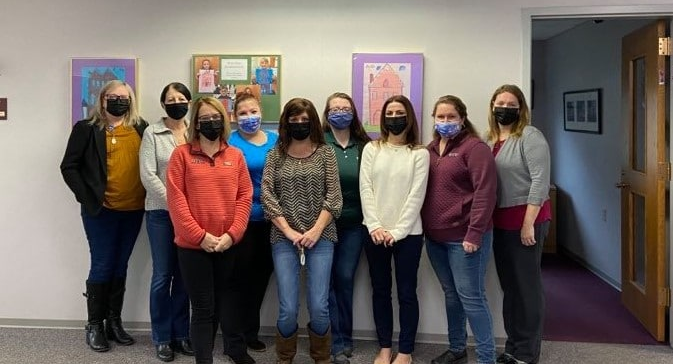 JAY — OTIS Federal Credit Union employees commemorated International Credit Union Day on Oct. 21 with a weeklong campaign of random acts of kindness.
Armed with a budget of $2,000, a committee of nine employees took turns visiting establishments in OTIS FCU’s field of membership — from Rangeley to Turner and points between — and surprising individuals and organizations with groceries, gas, meals, baked goods, fuel assistance, donations and more. Each employee was permitted to spend the money at their discretion.
Teller Stephanie Nichols and loan officer Lindsay Castonguay, covering the Jay/Livermore Falls area, bought pastries from Chretien’s Kitchen and delivered them to Regional School Unit 73 schools.
“The secretaries at the schools accepted the pastries with such appreciation and thanks,” Nichols said. “It felt great to give back to the community.” The pair also bought groceries and gas for individuals at Hannaford in Jay, and Food City and CN Brown in Livermore Falls.
Brenda Bryant, teller/supervisor backup, and teller Courtney Nightingale, covering the Turner/Livermore/Jay area, paid for a meal at Terry & Maxine’s in Turner, and then stopped by Greenwood Orchards in Turner to pick up pies, breads, cookies and cider. The pair surprised the Livermore Town Office staff, Turner Fire Department and the Turner Vet Clinic with the goodies. They ended the day by buying groceries for a woman at Hannaford in Jay and paying for a woman’s gas at Jay Diesel and Gas.
Kimberly Couture, collections/payment specialist, covered the Jay/Wilton/Farmington area, accompanied by her husband Joseph M. Couture, a longtime OTIS member. After buying groceries at Hannaford, they made surprise deliveries to the Wilton Area Food Pantry and Care and Share Food Closet in Farmington. They then bought a Box O’ Joe, doughnuts and muffins at Dunkin’s in Farmington, delivering them to the Franklin County Sherriff’s Department.
Carrie Judd, teller supervisor and teller Jannell Pomeroy focused on Hartford and Canton. They picked up four boxes of baked goods from Berry Fruit Farm in Livermore Falls, delivering them to Hartford Elementary School, to linemen working in the rain in Canton, to Pinnacle Rehabilitation Center in Canton, and to employees of Canton Variety. They also surprised individuals throughout the area, paying for gas and groceries.
Kim Turner, president/CEO, covered the New Vineyard/Carrabassett Valley/Kingfield area, buying groceries at Mountainside Grocers and Ayotte’s Country Store in Carrabassett Valley. At Irving in Kingfield, she filled an unsuspecting woman’s gas tank. At Our Village Market in New Vineyard, she paid for individuals’ food orders. \
She said the random act of kindness “that completely made my afternoon,” was anonymously paying $100 towards the fuel bill at Dead River in Kingfield of a mother of three children who has cancer. “There are no words to explain how touched I was [to be able to do this].”
Sarah Hayes, director of marketing and communications, covered the Phillips/Rangeley area, donating $100 check to Rangeley Friends of the Arts Creative After School Arts at Lakeside Theater. The free program for students in grades 5-12 interested in the performance arts is funded by grants and donations. CASA offers musical instrument lessons, theater workshops, graphic and fine arts, community service and more. Hayes spent the rest of the money surprising shoppers at Rangeley IGA and at Edmunds Market in Phillips.
Hayes said it’s the second International Credit Union Day that OTIS has commemorated with a week of random acts of kindness. “We are thrilled that we have more than doubled the number of those participating here at the credit union,” she said. “The last year and a half has proven difficult and trying for so many – we couldn’t think of a more appropriate time than now to take to the community and to spread some love and kindness. At OTIS, and at all other credit unions throughout the world, ‘people helping people’ is what we do every day – it is our ‘why,’ our reason for being. With our RAK campaign, we wanted to take that help one step further and really demonstrate to those living within our field of membership what being part of a credit union community is all about.”
Turner added, “International Credit Union Day is a great time to reflect on the mission of credit unions throughout the world and to be part of a movement that is not only focused on helping consumers be financial savvy, but one that has a deep concern for the success of the communities that credit unions exist in and serve. By being out in the communities we serve, providing Random Acts of Kindness, especially on International Credit Union Day, it was a win-win for everyone.”