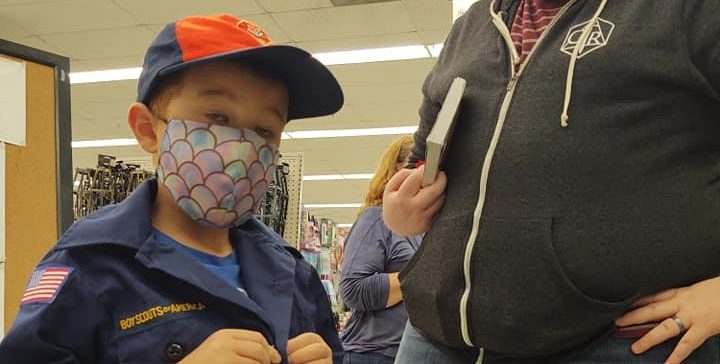 WATERVILLE- New Cubs and Scouts got uniforms, books and other Scouting items at the annual Scouting Uniform Bank held at the Goodwill Industries store in Waterville on Sept. 22.
The Scouts paid it forward by donating food for the Pleasant Street United Methodist Church Food Bank. Seven bags of canned goods and other nonperishables were collected at the event, and many Scouts left wearing gently used Scouting uniforms. Goodwill Industries collected and cleaned the donated uniforms.
Kayla Dennis, of West Gardiner, attended the event with her son, Cameron Rossingnol. “We were looking for something to get him into, and my mom noticed this on the town page on Facebook and forwarded it on to me,” Dennis said. “He has been so excited to get started.”

Cameron had already attended his first meeting with Gardiner Cub Scout Pack 672, and the next day got geared up for Scouting
“I am so excited about my whole day joining Scouting,” Cameron said. “This is my best day ever.” Cameron got a uniform, Tiger hat and neckerchief, belt, canteen, Tiger Cub book and Cub Scout bag.
He also got a “Scouting for Food” patch for donating food at the event.
First grader Maximus Buckhalter, of Belgrade, attended with his father, Eric Buckhalter. He had just joined Oakland Pack 454 and got a full uniform at the uniform bank.
Nearly 20 area Scouts, including one from Bath, were given everything they would need to get their Scouting days off to a good start.
The uniform bank started in 2014, event organizer Christopher Bernier, of Winslow said. Since then, it has provided uniforms and other items to Scouts who can not otherwise afford them.
“Scouting isn’t about how much you have in your pocket, it’s about how much you have in your heart to help other people,” Bernier said. “Scouting is for everyone.”
Items handed out Sept. 22 included backpacks, compasses, mess kits and song books. Parents who will be leaders also received material to support their program.
Bernier said it wouldn’t happen without Goodwill Industries. “We remove any of the earned badges from the uniforms, so the Scout has the chance to earn the badges themselves,” Bernier said. “Anything that has anything to do with Scouting that ends up at Goodwill during the year ends up in my hands and gets matched up with a Scout who needs it.”
Every Scout who donated food earned the Scouting for Food patch.
“I really just love this program because you see the look on their face when they get their first uniform,” Bernie said. “It is wonderful.”