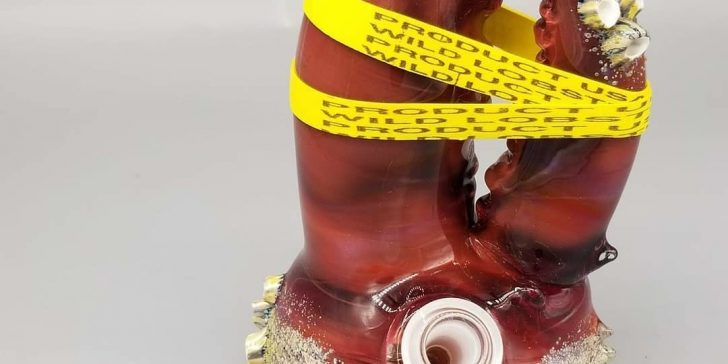 BELFAST — When I opened my shop in 2014, I wanted my customers to feel at home. Being Belfast born and raised, “home” means the coast — the boats, the salt, the water, the bay — and that’s what makes Belfast Belfast. I wanted to add that unique aspect to Rip Tide and reflect it in the art we offer.
Angie Furrow, also known as “Mrs. Claws,” is one of the first Maine artists I knew I had to feature on our shelves. Not only did she blow the cutest little animal pipes, but her lobster claws were so realistic! She was an obvious fit for our shop.
When we first met, she told me about glass blowing for a well known company from California. With her skill level, it really didn’t surprise me that she had worked for such a reputable company. Her critter pipes feature various animals all perched on sturdy, color changing bowls. Furrow makes sure each pipe’s character is one of a kind. Although her forte is sea critters, she doesn’t limit herself to ocean themes alone. Owls, butterflies, dragons — nothing is too wild for the lobster lady. One of her classic pipes feature bacon and eggs for those who like to “wake n bake.” Even more unique than her critter pipes are her infamous lobster claws.
The first set of claws at Rip Tide splashed down around 2015. They were uniform in style and size — around four inches in length and a solid brick red color. Each claw sported a bright yellow rubber band, the exact bands the lobstermen use on their bounty. She had told me of going down to the wharf to buy them. I thought, “This is awesome; this is Maine!” Who else goes the extra mile like that? The original brick red claw quickly became a collector classic. Adding to her iconic classic claw, Furrow started incorporating limited colors that mimic real life lobsters. Green, red and an occasional yellow started slipping their way into the lineup. It was a fun way to keep her collectors interested in her new work. During one of her visits, we talked about how awesome it would be to add “hype” colors, like uv reactivate and crushed opal class. A customer, who happened to be a fishermen, suggested she create a giant crusher claw.
We would chat about expanding into avenues like concentrate rigs, something she wasn’t as familiar with. She was having fun with her art, and her work really showed! Over the following year, her water pipes flourished into amazing pieces of sculpted glass. It is amazing to see artists like her transform and grow their craft over years. Their styles may change, but they are still able to remain true to who they are as professionals.
One of the best parts of my job is seeing the joy the glass brings to our customers faces. Recently we lost one of our most loved customers. I will never forget the day she bought herself a lobster claw pendant. It was blue, her favorite color. She wore the biggest smile as she proudly showed off her new claw and allowed us to snap a photo. I will forever be thankful to glass art for allowing me to make these connections. These aren’t just pieces of glass or pipes we are selling you; they are a gift of art from blowers to smokers.