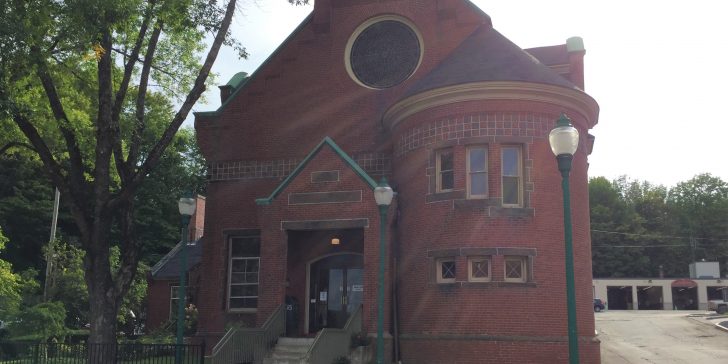 GARDINER — The Gardiner Library Association will begin celebrating Maine’s bicentennial with a yearlong speaker series on the history of the communities making up the lower Kennebec Valley. The series kicks off with a presentation by State Historian Earle Shettleworth Jr., “Charles Allen’s Kennebec River Photographs¸1898-1907,” at 6:30 p.m. Thursday, Oct. 3, at the Gardiner Public Library, 152 Water St.
All events are free and open to the public.
“The communities that make up the Gardiner Library’s primary readership –Farmingdale, Gardiner, West Gardiner, Litchfield, Randolph and Pittston — all have stories to tell from the past 200 years. With this speaker series, we’re going to tell some of them,” said Tom Farkas, president of GLA, the nonprofit group that financially supports the services provided by the Gardiner Public Library and maintains the library building for all residents in its service area.
“The Gardiner Library Association’s Avis Ames Speaker Series Celebrating Maine’s Bicentennial on the Lower Kennebec Valley will take a close look at local happenings before, during and after 1820, when Maine became our nation’s 23rd state.”
The Gardiner Library Association named this speaker series after Avis Ames, who was born Avis Ella Glidden in Whitefield in 1870, lived in Farmingdale and worked first as a teacher and later as Gardiner’s city auditor before her death in 1939.
“Avis Ames left an endowment to the library association to help further its mission with an eye toward history,” Farkas said.
The first three events of the bicentennial speaker series are:
* Tuesday, Oct. 3 — “Charles Allen’s Kennebec River Photographs¸1898-1907,”by State Historian and past Gardiner Library Association president Earle Shettleworth, Jr., at 6:30 p.m.
“History of Dresden, Maine” published in 1931. As part of Allen’s research, he assembled an album of more then 90 professional photographs of the Kennebec region. Many of these photos show historic buildings and sites. This presentation will feature a selection of these engaging images that capture views of towns along the Kennebec over a century ago. The photos are in the collection of the Maine Historic Preservation Commission.
* Thursday, Nov. 14 –“Maine Statehood and the Bicentennial: The View from the Lower Kennebec Valley,” by University of Maine professor of history Liam Riordan, 6:30 p.m.
Riordan is an early American historian specializing in the broad Revolutionary era. He has been a member of the University of Maine faculty since 1997. His illustrated presentation and discussion will explore the long statehood process in Maine that culminated in 1820 with separation from Massachusetts.
The presentation will cover four broad themes spanning then and now: the “two Maines” and sharp partisan conflict; the explosive place of slavery relating to the Maine-Missouri Crisis; Wabanaki sovereignty; and the uncertain location and meaning of international borders.
* Thursday, Dec. 5 — “Maine’s First Referendum: The Who, What, Why and When of the Vote for Statehood in the District of Maine and the Lower Kennebec Valley,” by Maine Secretary of State Matthew Dunlap, 6:30 p.m.
Although there are now six communities in the Gardiner Library Association’s service area, in 1819 the geographical area included only three –Gardiner, which included what are now West Gardiner and Farmingdale; Pittston, which included Randolph; and Litchfield.
Dunlap will speak about the 1819 referendum question that was overwhelmingly approved by voters in the District of Maine. Dunlap was elected by the Legislature to serve as Maine’s 47th and 49th Secretary of State. He was sworn in Jan. 8 to his fourth consecutive and seventh overall term of office.
Former Gardiner Library Association president Dennis Doiron is chair of the library association’s committee that developed the bicentennial speaker series.
“We’re really thrilled with this speaker series, because it puts local names, places and faces from the Lower Kennebec Valley over the past 200 years in the context of Maine’s bicentennial,” Doiron said. “Additional speakers in the winter and spring will be announced later; this speaker series will continue well into 2020.”
The Gardiner Library Association is a nonprofit organization that owns and maintains the Gardiner Public Library for the betterment of the Gardiner Public Library’s member communities and the general public.