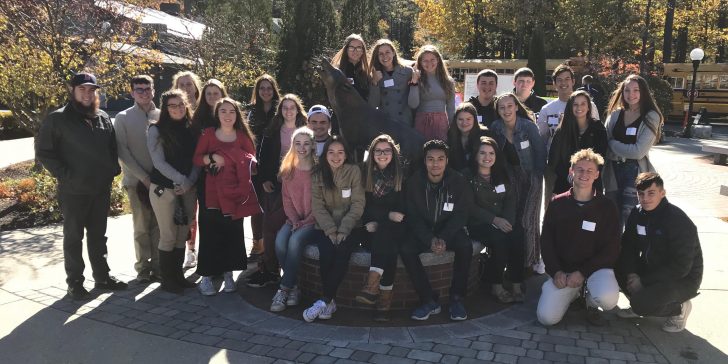 Cindy Williams, an anchor and reporter for WCSH News Center Maine was the keynote speaker, and discussed the internet, and showed a video about how to properly behave online. She also told a story about an internet troll who ended up becoming friends with someone they harassed. Her message was to be kind to others online. After Williams spoke, students were split into groups, which were named after important leadership traits. All students from Mountain Valley were put into separate groups.
Each group then went to different workshops, which were led by community and business leaders.
The workshops varied greatly. One was about protest songs. There, the students listened to protest songs from different decades. Another workshop was hosted by Maine Inside Out, which is a theater group made up of people from correctional facilities.
Jobs for Maine Grads had a workshop, and people who went there participated in an interesting activity. They received a list of items that they might have while lost at sea, and then had to rank them from most important to least important. Some workshops consisted of listening to inspirational speakers.
One workshop’s speaker was a man from London who grew up with dyslexia. He wasn’t able to attend college because he failed many tests because of his learning disability. Even so, he became a hairdresser (a high earning job in his neighborhood) and even ended up doing hair for Vogue magazine once. Eventually he became an inventor, and he now makes wine bottles. All of the workshops had an underlying message about leadership and being successful.
Student Council members were also able to meet other students from all over the state.
Those attending were Olivia Welch-Blackwell, Leigha Carrier, Madison Russell, Jayshaun Wright, Mackenzie Arsenault, William Sorenson, Anthony Mazza, Taylor Henry, Kierstyn Lyons, Phoenix Hughes, Hunter Blauvelt, Kennedy Arsenault, Alice LeDuc, Gabrielle Gallant, Kylee Pelletier, Colby Volkernick, MaryEllen LeDuc, Audra Bean, Abigail Gauvin, Courtney Therrien, Rylee Sevigny, Avery Sevigny, Bryce Cormier, Keagan Hodsdon, Cameron Gallant, as well as teacher William Lane and teacher and student council advisor Lisa Russell.