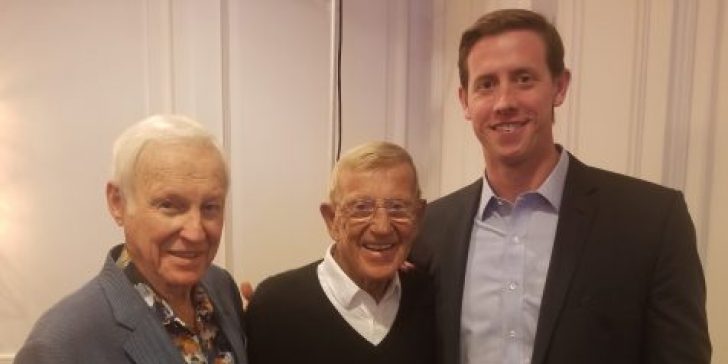 On Nov. 12 and 13, I attended the Harvey Mackay Academy: Street Smarts Summit. It was held at the Hotel Camby in sunny Phoenix, Arizona. My friend and mentor, Harvey Mackay, author of “Swim with the Sharks without Being Eaten Alive” called me in late July to extend the invitation. The event magnetized sixty authors, speakers, entrepreneurs, and CEOs from all around the United States. There was some serious talent in that room and I was fortunate to be a part of it.
Over the course of those two days, I listened to the transformative messages of eight of the world’s foremost authorities on topics such as time management, leadership, networking, sleep, creativity, business development, kindness, and teamwork. Each speaker earned the undivided attention of every person in that room and did so for the entire sixty minutes he or she had the stage.
On day two, Lou Holtz took to the podium. The second he did, the room fell silent, interrupted only by roars of laughter that were evoked by his sense of humor. He began by telling us that the candles on his birthday cake now cost more than the cake itself and that over the years, he has learned a few things about life.
The energy in the room quickly shifted as he began to dispense life advice, the kind that hits you right in the heart. In his sixty minutes, he shared ideas such as, “The good Lord put eyes in front of our heads so we can see where we are going and not in the back of our heads to see where we’ve been. Do everything to the best of your ability. Everyone is capable, no matter what, of doing their best. Don’t let anyone else control your attitude; only you can do that. You can’t have a relationship if it is not based on trust. Always do the right thing. Show people love before the catastrophe hits.” These were just a few.
Amidst all the great ideas he shared, the comment about the two most important days in a person’s life held me suspended in deep thought.
Have you identified your “why”? Have you ever asked yourself why you were born? Why you are here? Why you have the skills that you have? Why you have the friends that you have? Why you have the job that you have? Why you have the happiness, or the frustrations, or the successes that you have? Why anything?
Some people think that the future is a predetermined sequence of events and wonder what those events include. Is this really the case? I have learned that the future is something we create for ourselves based on the choices we make, and as Mr. Holtz said, choice is the most important word in the English language. The future will include whatever we think about the most, want the most, and desire the most, granted we take action and actively pursue the results we demand for ourselves.
If you take an honest look at your life today, you will quickly realize that many of thing things in it are the direct results of decisions you’ve made in the past. If we don’t like our current situation, we must consider changing our actions, which likely requires us to change our habits, which likely requires us to change our belief systems.
I believe that we are each eternally unique and that each one of us has greatness within us. Once we understand why, everything changes.
See you all next month.

Jac Arbour is a certified financial planner and chartered financial consultant, and is president of J.M. Arbour Wealth Management in Hallowell.