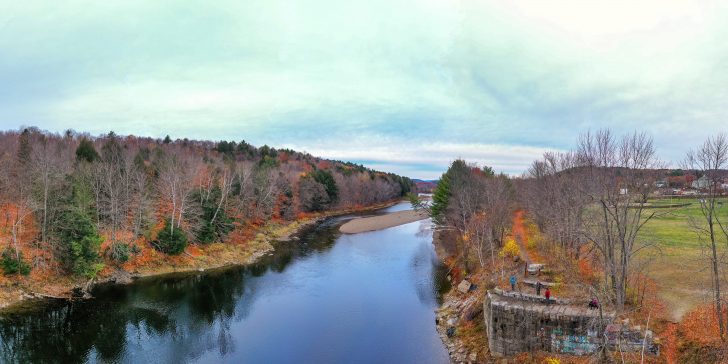 PHOTO: The new Whistle Stop Trail bridge will replace a railroad trestle bridge that was washed away in the 1989 flood. (Laura and Adam Casey photo)

FARMINGTON – The High Peaks Alliance was recently awarded $2,041,000 through the federal Fiscal Year 2023 Transportation, Housing and Urban Development appropriations bill to rebuild a multi-use bridge over the Sandy River.
The money will be used to support construction of a 336-foot multi-use bridge connecting 14-mile long Whistle Stop Trail, which begins in Jay, to the center of Farmington. The bridge will be in the spot where a railroad trestle bridge, not used since 1976, was damaged by floods and finally washed out in 1996. It will be owned and managed by the Maine Bureau of Parks and Lands as part of the Whistle Stop Trail.
The request for the money was supported by U.S. Sen. Susan Collins, R-Maine; Sen. Angus King, I-Maine, and U.S. Rep. Jared Golden, D- Maine 2nd District.
“Rebuilding the Sandy River Bridge to connect the regional Whistle Stop Trail to downtown Farmington has been one of this region’s biggest opportunities,” said Brent West, executive director for the High Peaks Alliance, an organization protecting Maine’s tradition of public access. “Farmington is the regional hub and gateway to the High Peaks Region in Franklin County, and our communities have always been linked to our natural resources. The High Peaks Alliance is thankful to Senators Collins and King and Congressman Golden for seeing the importance of this project to Maine.”
“The Bureau of Parks and Lands is thrilled to be part of this collaborative effort to rebuild this critical trail connection,” Andy Cutko, bureau director, said. “We appreciate the leadership of the High Peaks Alliance on this initiative, as well as the funding support from our congressional delegation. We look forward to working with local partners to see this project through to its completion.”
West said collaboration of government on every level, and local organizations, means the project will finally happen.
“The next steps will be to secure any construction clearances and final engineering before bidding out the construction,” he said.
This project has also received funding from Susan and Fritz Onion, Sandy River Charitable Foundation, Maine Timberland Trust, Franklin Savings Bank, town of Farmington, Northern Border Regional Commission and the state snowmobile program.
Susan Onion said, “Fritz and I remember skiing and biking across the old trestle between Farmington and West Farmington in the 1980s. The rebuilding of the Sandy River trestle will be a great asset for the community through improving access and providing safe passage across the river while connecting the Whistle Stop Trail to downtown Farmington and the western foothills and mountains. We are thrilled that community support and funding have come together to help bring this project to fruition after all these years.” 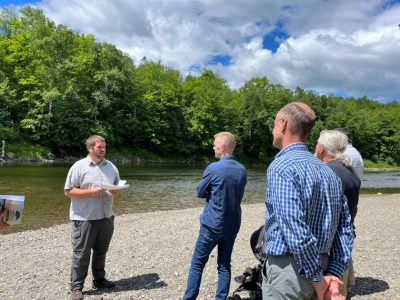 U.S. Rep. Jared Golden, second from left, visits the site where the Whistle Stop Trail bridge will cross the Sandy River in Farmington. The bridge means that those using the recreational trail can travel 14 miles from Jay to Farmington. (Submitted photo) 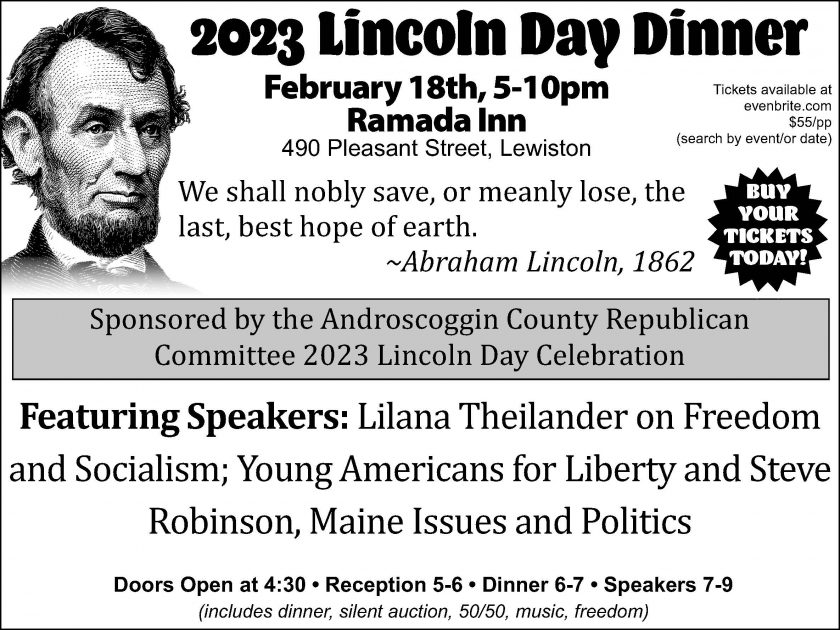