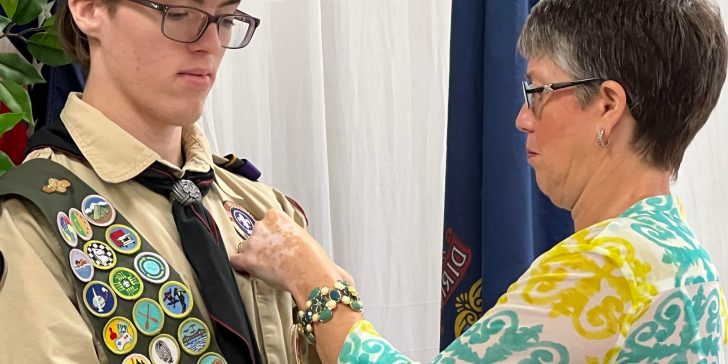 AUGUSTA – Tyler Cahn, of Readfield, a member of Augusta Scout Troop 631, has built survival shelters in the woods and in the snow; practiced fingerprinting and welding; worked with electricity; made movies and computer games; traveled back in time to the 1840s during Camp Bomazeen’s Bushcraft program, and more. 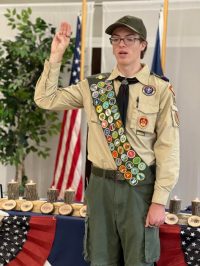 On Saturday, July 30, Cahn received Scouting’s highest honor – the Eagle Scout rank. Less than 4% of all Scouts attain the rank of Eagle, and it is a goal that he has had since first grade when he joined Cub Scouts while living in New York.
Since then, Scouting has taken him to the National Jamboree in 2017 and the World Scouting Jamboree two years later. It introduced him to new friends and given him opportunities to demonstrate leadership.
His Eagle ceremony was held at the Augusta Lodge of Elks with friends and family in attendance, some coming from New York to be there. He is the son of Tracey and Russell and Cahn.
One special guest was Ryan Geopfert, who became an Eagle Scout in Seaford, N.Y., when Cahn was a Cub Scout in the same program. That inspired Cahn to earn Eagle Rank. Geopfert made the trip from New York to attend and gave Tyler’s introduction during the ceremony.
Cahn has earned more than 60 merit badges, and said the most fun was Shooting Sports and the most challenging was Citizenship in the World. “That one was a lot of work and a lot of different cultures and forms of government to learn about,” he said. “These are things I had no idea about.”
“Scouting is a great adventure,” he added. “There is always something fun to do and something new to learn about.”
As part of becoming Eagle, the Scout must complete a project of significant value to the community. Cahn, a frequent volunteer at the Kennebec Valley Humane Society, wanted to do something for animals. His original plan was to host a community adoption day event, but the COVID-19 pandemic didn’t make it possible. Instead, he set up a dedicated donation bin with graphics and logos. He also organized, promoted and led a donation drive to fill the bin, resulting in several hundred pounds of much-needed supplies for the animals.
Cahn attends Kent’s Hill School, where he is going into his senior year. 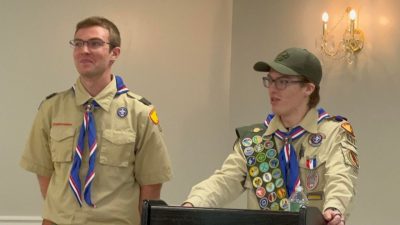