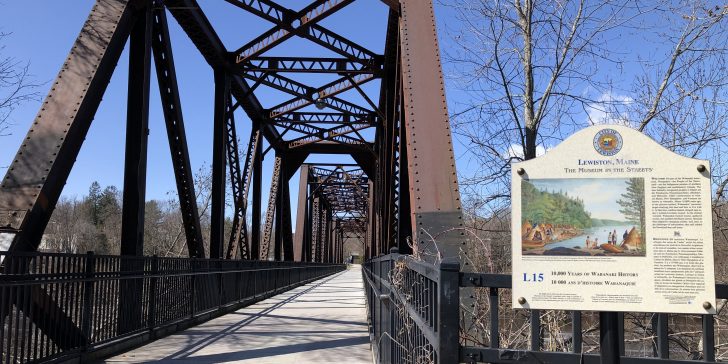 LEWISTON — A gathering will take place 10 a.m. at the Gendron Franco Center, 46 Cedar St., fololowed by reflections at the Bernard Lown Peace Bridge, Saturday, Aug. 6.
The event, which is on the annivesary of the U.S. nuclear attack on Hiroshima, Japan, Aug. 6, 1945, is aimed at recommitting to no nuclear war and commemorating Bernard Lown, the Nobel Prize-winning namesake of the bridge.
Lewiston Mayor Carl Sheline will offer welcoming remarks. Auburn resident Allen Harvie will preside. Other speakers include former Lewiston Mayor Laurent Gilbert, who will recall the contributions of Lown and the campaign in 2008 to rename the bridge in Lown’s honor; Doug Dransfeld, who will testify to the urgency of eliminating nuclear weapons and, as head of the Maine chapter of Physicians for Social Responsibility, will report on the group’s work toward that cause; Ted Walworth, also a physician, who has worked with Doctors Without Borders, and will reflect on the public role of physicians advocating for world peace; Denny Dreher and Fred Brodeur will speak on behalf of Pax Christi Maine.
The short film “Dr. Lown: A Documentary” will be shown.
Organizers are Maine Veterans for Peace, Peace Action Maine, and Physicians for Social Responsibility – Maine Chapter. Sponsors include PeaceWorks of Brunswick and Pax Christi Maine.
Lown, who died in 2021, was a cardiologist, who invented the DC defibrillator. He and Soviet cardiologist Eugene Chazov in 1980 co-founded the group International Physicians for the Prevention of Nuclear War, which remains active. Through their efforts, physicians joined in a worldwide campaign for a moratorium on nuclear weapons. This was “the greatest political issue of our time,” Lown said. Lown and Chazov together received the Nobel Peace Prize in 1985.
Lown emmigrated from Lithuania with his family, and studied at Lewiston High School and the University of Maine before entering medical school. He was a co-founder in 1961 of Physicians for Social Responsibility. He served as that group’s first president.