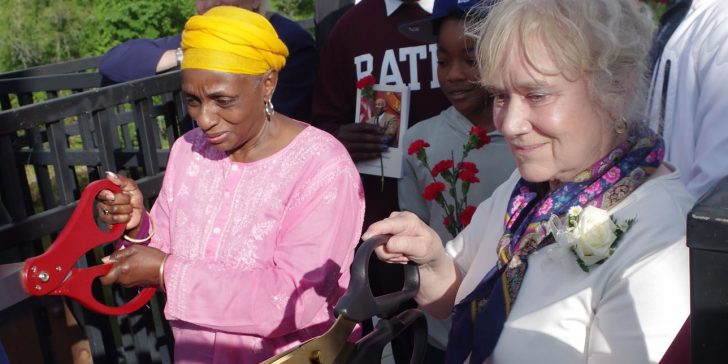 By Bill Van Tassel
To honor a Twin Cities icon, shared and respected by both Auburn and Lewiston, the footbridge over the Androscoggin River — a fitting metaphor for his connection to both communities — has been dedicated to and named for the late John Jenkins, who died in September 2020.
Stretching between Bonney Park in Auburn and Simard/Payne Park in Lewiston, the footbridge symbolizes Jenkins as a good will ambassador, who served as mayor of each city as well as a state senator for District 21.

A large crowd attended the June 10 dedication with both Lewiston Mayor Carl Sheline and Auburn Mayor Jason Levesque speaking about Jenkins’ contributions to the cities.
Jenkins arrived in Lewiston to attend Bates College, graduating in 1974. His passion for martial arts took him across the globe. An exceptional athlete, Jenkins was named to many local, national and international athletic halls of fame.
He wore many hats in his various pursuits — mentor, community volunteer, trainer, instructor, motivational speaker and entrepreneur.
Jenkins is also remembered for his interests in human rights and equality, his motivational seminars, his martial arts’ studio as well as his numerous individual accomplishments in karate and jujitsu world competitions.
His longtime partner Ann Parker spoke lovingly of him, telling those gathered in Bonney Park to remember the “spirit of John as you walk across this bridge between the two cities.”
I first met John Jenkins in 1973 when he was a senior at Bates College. I was a recent university graduate and teaching school in Turner. While renting an apartment above Sam’s Pizza in Lewiston, I began frequenting the Bates College campus to meet people. The first open event I attended was held in Chase Hall, at that time a place for dining and social gatherings.
It was on this first visit that I met John. He was showing a group of students a slide presentation about his hometown of Newark, N.J. I was somewhat familiar with Newark, and at the close of John’s presentation, I introduced myself as a fellow Jersey-ite. We had other things in common such as education, current political interests, and athletics, though John was much more accomplished in that last area.
As I continued to live in the Lewiston/Auburn area several more years, I would, on many occasions, bump into John at various events — athletic, faith, political or civic happenings. He always remembered me.
The point of sharing my mild acquaintance with John is this: He always made me feel like I was somebody. His smile, personable attitude and enthusiastic voice was truly welcoming. I would never forget that about him. He also had a great and easy laugh. We never became close friends, but had we walked closer paths on our life’s journeys we certainly could have, and I would have welcomed it.
Through news and conversations with local citizens I would occasionally hear about what John was doing with is karate studio, his public speaking, and his gentle political life of trying to bring more unification and goodwill to the Twin Cities.
We were never close friends by any stretch; I was not even aware in 2020 that he was ill, but when I heard of his passing, I had this thought:
In a society that often seems in social and moral conflict, it is regretful to think that we have lost another person of integrity. 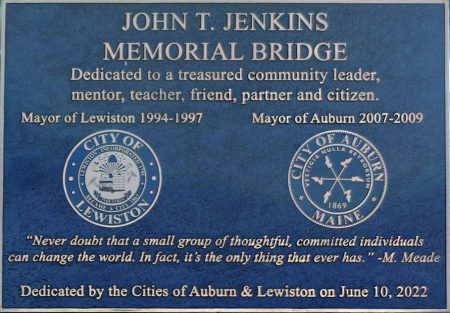