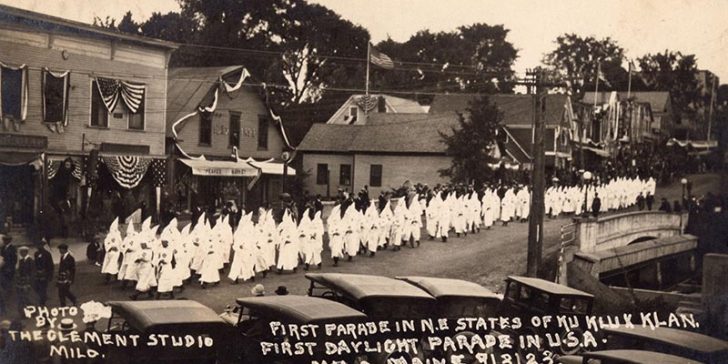 MONMOUTH — Cumston Public Library will host author Mark Alan Leslie, who will discuss the history of the Ku Klux Klan in Maine, at 7 p.m., Wednesday, Jan. 26, via Zoom.
The KKK held its first daylight parade, nationwide, in Milo in September 1923, and later that year, When some 15,000 Ku Klux Klan members from around Maine gathered in Waterville in September 1923 for their first annual state convention and lit the forest “ablaze with burning crosses,” the event shook the country. The notion that the secret society could not only exist, but thrive, in “lily-white” Maine seemed ludicrous to many, but its power reached such heights that it helped elect Ralph Owen Brewster, as governor, as well as the mayors of Auburn, Rockland, Bath, Westbrook and Saco, and many other politicians.
Portland-Westbrook, Lewiston-Auburn and Bangor-Brewer were particular hotbeds of KKK activity in the 1920s,. The Washington Post reported that an estimated 19 percent of Maine’s population supported the Klan in 1923.
“While few African-Americans lived here at that time, the KKK’s targets were French-Canadian, Irish and Polish immigrants — largely because they were Roman Catholics — as well as Jews,” Leslie said.
Leslie’s novel, “The Crossing,” published in 2018, is a fictional account of the KKK’s impact on a small western Maine town in 1923.
Leslie will discuss this legacy, which has been largely absent from history books.
Registration is required. The Zoom link is available by emailing cumstonpubliclibrary@gmail.com or calling 207-933-4788.