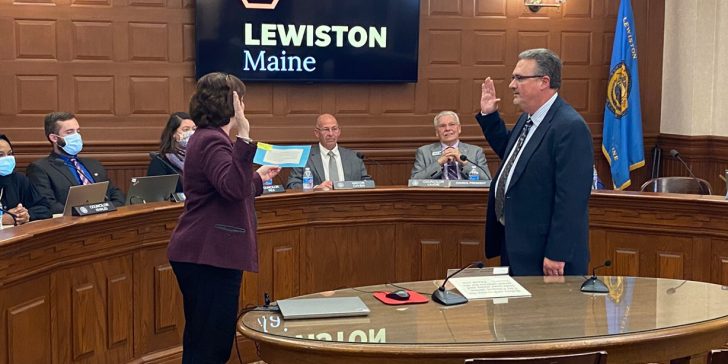 “Both personnel selected for the chiefs positions have successfully risen through the public safety ranks, have strong ties and fondness for the community of Lewiston, and have shared great strategic visions for their respective departments,” said City Administer Heather Hunter. “They possess great experience and vast respect within their departments that will allow them to pursue many initiatives as well as confidently face emergencies placed before them.”
Of Lenfestey, who replaces her as finance director, she said he’d been her “right hand man for the past 24 years.”
She added, “I’m sure he’s looking forward to the challenges placed before him, and it is with great pleasure that I would recommend this approval.”
St. Pierre has been a member of the Lewiston Police Department for more than 29 years, serving as patrol officer, special agent with the Maine Drug Enforcement Agency, detective, sergeant, sergeant of detectives and lieutenant of both patrol and most recently of the Support Services Division, where he was public information officer. A Lewiston native, he earned an associate degree in criminal justice from St. Anselm College in Goffstown, N.H., and also attended the University of Southern Maine. He graduated from the FBI National Academy in March 2018.
Caron has been a member of the fire department for 25 years, working in the Central, Main and Lisbon Street fire stations. He became lieutenant in 2011, assigned to Ladder 1 on A Platoon at Central Station. In 2017, he served as interim assistant chief; was promoted to assistant fire chief in 2019; and most recently has been interim chief. He has an associate degree in fire science from Southern Maine Community College and in Computer Science from Central Maine Community College. He has served several terms as vice president of the Lewiston Firefighters Association.
Lenfestey has worked for the city for 24 years, as senior staff accountant, business manager – public works, chief accountant, assistant finance director and interim finance director. He is also treasurer for the Lewiston-Auburn Water Pollution Control Authority.
Lenfestey earned a bachelor of science in business administration from the University of Maine at Augusta, and is certified as a municipal treasurer for the Maine Municipal Tax Collectors and Treasurers Association. Before working for Lewiston, he was treasurer for the town of Belgrade.