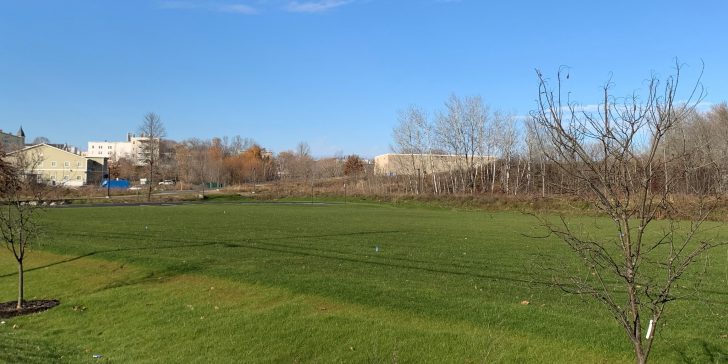 LEWISTON — The Lewiston Youth Advisory Council is hosting a naming contest for the newly established municipal athletic park on Bartlett Street on land previously occupied by Hudson Bus Lines.
The city is nearing completion of the park, and at its Nov. 16 meeting, the City Council approved a naming rights program, authorizing LYAC to publicly seek naming for the park and field/sledding hill, through a contest and a naming rights sponsorship opportunity.
The first step will be an online contest, in which individuals can submit suggested names to www.lewistonmaine.gov/parkcontest. The form can be filled out online, or downloaded and filled out as a hard copy, and emailed to dottie@lewistonmaine.gov or mailed to LYAC c/o Administration, Lewiston City Hall, 27 Pine Street, Lewiston, ME 04240.
The submission deadline is Thursday, Dec. 16.
“The naming contest enables the community to be engaged and hopefully enthusiastic about this new athletic offering in Lewiston,” Keira Potvin, LYAC vice-chair, said.
LYAC member Nafisa Tasnia added, “The park naming contest provides an opportunity to make a bit of history here in Lewiston.”
The online and hard copy contest form requires a proposed name along with a brief narrative explaining why that name proposal should be selected.
Submissions will be reviewed by Lewiston staff and LYAC. If there are multiple exemplary submissions, the top three will result in interviews being scheduled to acquire further information about each proposed suggestion.
The final name selected is subject to Lewiston City Council approval. Following the park contest, LYAC will seek a monetary sponsor for the naming of the park’s field/sledding hill.