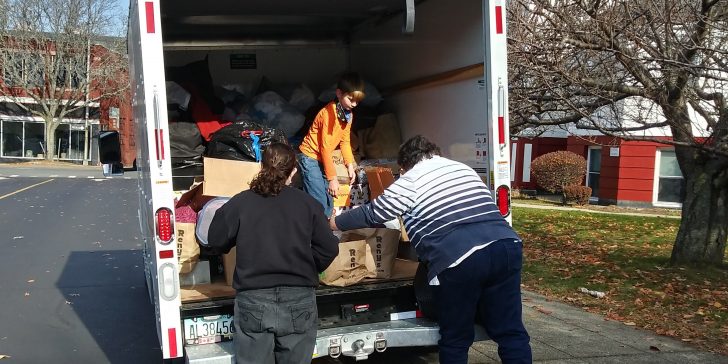 One of the organization’s best helpers, Ben Hansen from the town of China, joins Rita Newell of Lewiston and an MBMM staff member, loading the truck. (Submitted photo)

AUBURN — Members of the American Baptist Women of Maine on Nov. 10 delivered items (new and lightly used clothing and housewares) to the Massachusetts Baptist Multicultural Ministries for distribution to incoming Afghan refugees.
The ABWM rotates their “state projects” between within-state, national and international projects. This is the “national” year and the group chose MBMM because it is a Baptist organization, welcoming 150 Afghan families to New England. The local collection site was Court Street Baptist Church in Auburn.
Churches that contributed to the collection were Court Street Baptist, East Otisfield Free Baptist, Litchfield Plains Baptist, Greene Baptist, East Millinocket Baptist, Topsham United Baptist and Thomaston Baptist.
The group first intended to transport items in personal vehicles, but because of the outpouring of gifts, a truck was needed.
“We are grateful to the people at U-Haul, Center Street Auburn, for the discount they offered that made this project affordable,” organizers said.