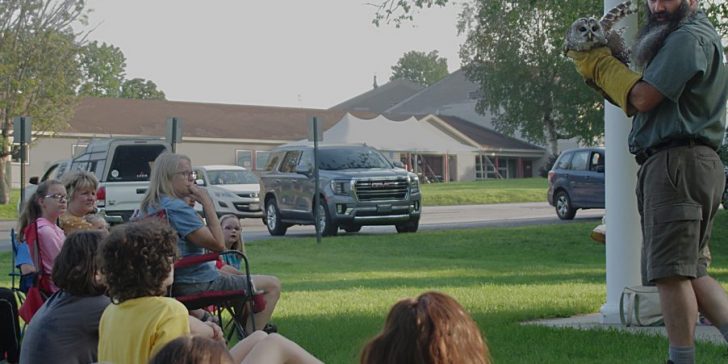 PHOTO: Josh Sparks tells the story of Percy the barn owl at a recent visit to Turner Public Library. Sparks cares for more than 200 animals at his New Gloucester home, as well as doing animal rescue and informative shows around south-central Maine. (Bill Van Tassel photo)

By Bill Van Tassel
TURNER — Josh Sparks set his collection of animal cages on the floor of Turner’s gazebo. He brought 10 interesting critters Sparks’ Ark had rescued or nursed back to health at its farm in New Gloucester. 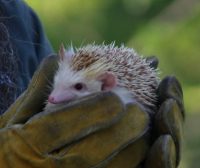 From the tiny hedgehog and sugar glider to the nine-foot constrictor and Percy, the injured barn owl, the youngsters in the audience were surely entertained.
Sparks, his father and their families have been in the animal rescue, care and rehab of smaller animals for two generations; they have plenty of stories to tell. Josh is a good storyteller and able to keep the attention of young children and adults alike. Although those in attendance were not allowed to pet the critters (for the safety of the kids and the animals), there was plenty of time for questions and a few personal stories from the children.
Sparks’ tales included the extraction of a pet snake out of a drainpipe, being sprayed by a skunk he had removed from a home invasion, chasing squirrels, and getting a pet Emu from a friend for his wedding. He told one where he responded to a request to remove a racoon out of a house and arrived to find the homeowner and a friend armed with hockey sticks. “That’s probably not a good idea,” he said, “for more than one reason.” Sparks uses animal safe traps, know-how and patience instead.
He explained that caring for as many animals as they have rescued over the years is a full-time job. He minced no words in sharing that one must be willing to clean up all kinds of stuff and not forget that some of the animals do not make good pets for most people. He warned everyone that, in most rescue and removal of wild animals, “Do not approach them, but call a professional to help you.”