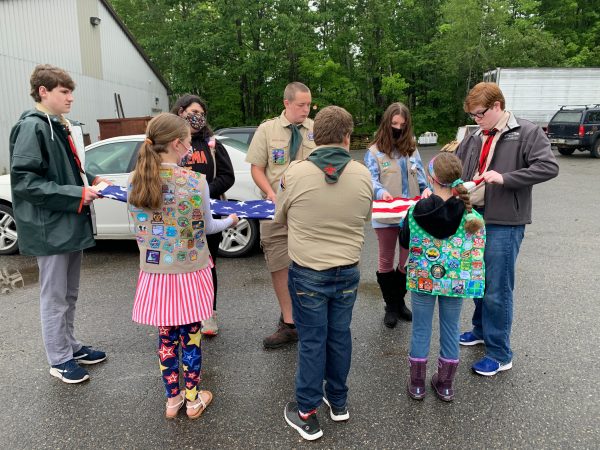 Scouts from Oakland, Winthrop, Monmouth and Hallowell honored those who gave their all in defense of our nation during recent Memorial Day activities. Winthrop and Monmouth Scouts marched in the annual parade through town and folded the American flag. Oakland Scouts from Troop 454 placed flags at veterans’ graves May 22. Hallowell’s Troop 647 also spent May 22 with the veterans of Goodrich-Caldwell American Legion Post 6, placing more than 450 flags on veterans graves at the town cemetery, Troop Leader Glenn Glidden said. “This is something we have done with our group since they were very young in Pack 647.” He said several of the Scouts also spent hours over the winter preparing flags for reuse this year at the cemetery or retirement. In Winthrop, Troop 604 joined Girl Scout Troop 131 marched in the parade, and also folded the flag, took part in a moment of silence, and more.Both troops are charted by Winthrop American Legion Post 40. Monmouth’s Pack 654 also joined the Winthrop parade. Kennebec Valley Scouting District Chair Joe Shelton praised the Scouts. “Through our scouting programs, we teach the importance of citizenship to every age group so it was so encouraging to see our Scouts taking part in these important events in their community,” he said.