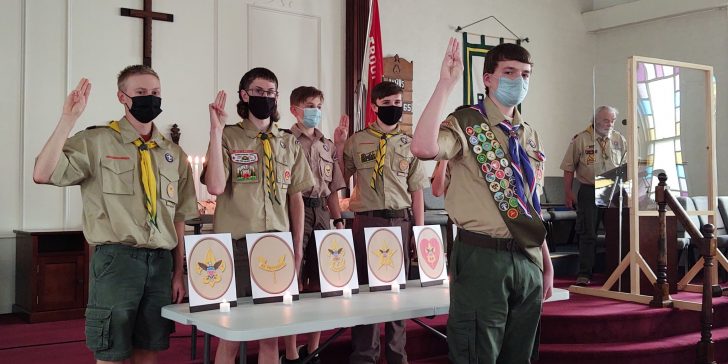 CHINA — Troop 479 held a small ceremony to honor its newest Eagle Scout, Hunter Praul.
The ceremony was held at the China Baptist Church on Sunday, April 18. Praul was presented scouting’s highest honor by his parents, Erika and Darryl Praul, of China, and in turn presented them with Eagle Scout Mother and Father Pins.
“Hunter is an amazing young man,” said Troop 479 Scoutmaster Scott Adams. “He never seeks to be in the spotlight but is always the first to try to make easier the lives of others. Hunter’s Eagle Scout project- building a home for a needy man in Costa Rica- was incredible. He raised the money needed here, assembled a team, coordinated efforts both here and in Costa Rica, led and took part in the building of the home and gave someone he barely knew a significant help up.”
Hunter is the 44th Eagle Scout from Troop 479 since Adams became Scoutmaster in 1989. The troop was formed in 1959.