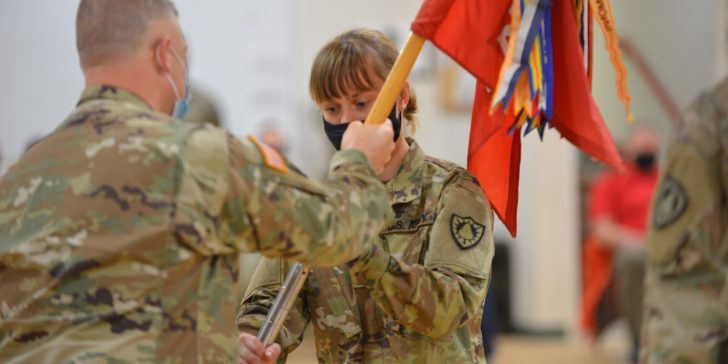 NORWAY — 1st Lt. Ellen Morrison, of Bowdoin, accepted the company guidon from outgoing commander Capt. Jonathan Bratten on April 30, assuming command of the 251st Engineer Co.
Morrison is the first female officer to combat Maine’s combat engineer unit. The change of command ceremony was held in front of family, friends and Guard members at the Norway Armory.
An ordnance officer turned engineer, Morrison has served as the unit executive officer since October 2019, and previously was platoon leader and executive officer with Augusta’s 152nd Support Maintenance Co. She also was a platoon leader with the 251st during two large out-of-state training exercises in New York and Louisiana.

“I am honored to have the opportunity to serve as your commander and work alongside the current officers, noncommissioned officers, and future noncommissioned officers,” Morrison said to the unit in her command philosophy statement. “I appreciate your dedication, sacrifice, and your willingness to do what less than .05 percent of the population will ever do – protect our country.”
Bratten, in his farewell remarks, said, “Two-five-one, you’re getting a great commander in Lt. Morrison – you won’t find another officer that cares for this unit as much as she does. Lt. Morrison, take care of them, and they’ll take care of you. Together, you’ll continue to do great things for the unit, the state, and the nation.”
Bratten is departing command and taking a leave of absence from his full-time historian position in Augusta to accept a scholar-in-residence position at the U.S. Military Academy in West Point, N.Y., followed by a year-long tour at the U.S. Army’s Center of Military History in Washington, D.C.
Morrison says she has three primary focuses – empathy, leadership and initiative. She says she is looking forward to empowering junior leaders and building on the unit’s cohesive team, ensuring a positive impact on the future of the company.
An avid Crossfitter and first-degree black belt in Taekwondo, the new commander also looks forward to new training opportunities.”I’m excited to create challenging training events,” said Morrison. “As a platoon leader and XO I always felt accomplished at the end of a hard mission. The stories and teamwork that came out of those missions are what kept me in the military.”
Adopted from Russia by American parents at an early age, Morrison spent her formative years in Silver Spring, Maryland, eventually following her brother and godfather into military service. She was also influenced by her father who worked for the National Security Agency. She holds a bachelor’s degree from New England School of Communications in Bangor and is employed by PatraCompany, a visual marketing company in Brunswick.
The 251st Sappers consists of approximately 95 soldiers from across Maine. The unit traces its lineage back to June 1810 and saw its first campaign during the War of 1812. The 251st is task-organized to provide assault, obstacle emplacement, route and area clearance, and general engineering support to a brigade-sized element.