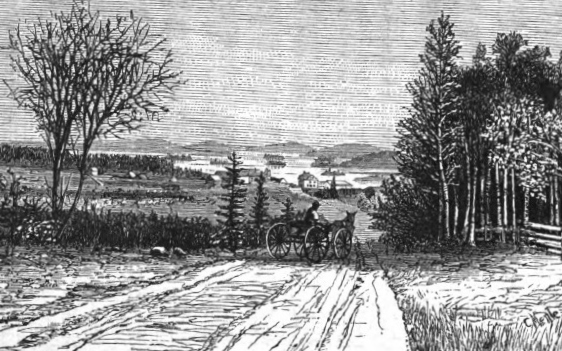 A sketch of the view from Indian Hill overlooking Greenville and Moosehead Lake, which appeared in an 1875 issue of Harper’s Magazine. (Submitted photo)

Greenville began to emerge in 1835 when one Henry Gower cleared land beside Moosehead Lake. By 1846 there was a hotel, store, two blacksmith shops and a schoolhouse. Between 1840 and 1850 the population grew 155 percent, from 128 to 326. Greenville had evolved into Maine’s northwoods gateway.
Charles Farrar rode by train, then stagecoach, from Bangor to Greenville in 1880. He later wrote the “Illustrated Guide to Moosehead Lake and Vicinity,” which describes his train ride through Sangerville, Guilford and Abbot into Monson in some detail:
“The scenery grows wilder and more picturesque…the hills develop into mountains… Monson is a pleasant and wide-awake little village, situated in the midst of a mountainous forest country that stretches beyond it for many miles.”
From Monson, the train arrived at Blanchard Station 20 minutes later where he transferred to a “splendid Concord coach… drawn by six fine horses.” During the 12-mile trip to Greenville, Farrar enjoyed “charming views of mountain and valley, dense forests, open pastures, and cultivated fields…ponds and lakes, quiet brooks and brawling streams…”

He was traveling over part of the old U.S. mail route from Skowhegan. Farrar wrote of the highway’s poor condition until repairs were made in 1878, making it “first-class order now equal to any country road in (Maine).”
The stage rolled over the rebuilt highway for an hour while Farrar took in the views. From atop Indian Hill, overlooking Moosehead Lake, Farrar wrote:
“The first glimpse at this beautiful sheet of water, stretching far away to the north, studded with emeralds, in the shape of green wooded islands, reminds one of a broad river sweeping to the ocean… and we trace for many miles the sinuosities of its shore, until lost among the mountains that guard it.”
Greenville was the pioneer settlement in that section of Maine, Farrar related, emphasizing its remoteness by saying “beyond this point there are not a dozen houses between us and Canada.”
In Greenville village, Farrar noted mercantiles that gave “quite an air of business” including two hotels – the Lake House and the Eveleth House. John H. Eveleth, owner of the later, also operated a store in Greenville Junction, where groceries, wearing apparel and sporting goods were sold and where parties were outfitted for wilderness excursions. His hotel held 50 guests and advertised state of the art accommodations, boasted a “well furnished table” and rentals of horse teams and boats. It was situated near the landing where his steamboat, Fairy of the Lake, launched daily runs between Greenville and Mount Kineo. Eveleth also owned a sawmill, gristmill, logging operations and significant real estate, including the 1,200-acre Farm Island. Today, the Moosehead Historical Society & Museum is housed in the 1890s era Eveleth estate.
In reading Farrar’s 1880 account of the village, not yet 50 years in existence, it is no wonder that Greenville was considered the gateway to Maine’s northwoods country. A distinction it holds to this day.

— Dale Potter-Clark, a founding and charter member of the Readfield Historical Society, researches and writes about local Maine history. Her writings include the book “Founders and Evolution of Summer Resorts” and “Kids’ Camps on Four Lakes in Central Maine.”