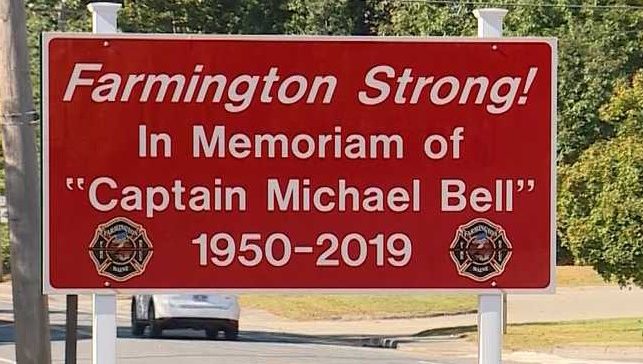 AUGUSTA — The United States and state of Maine flags were lowered statewide Wednesday in recognition of the one-year anniversary of the explosion at LEAP Inc. in Farmington, which claimed the life of Farmington Fire Department Capt. Michael Bell and injured several others.
“One year ago, I stood amid the wreckage of an explosion which had claimed the life of Captain Michael Bell, injured several others like Larry Lord, devastated my hometown of Farmington, and shook the entire state of Maine,” Gov. Janet Mills said in a news release. “While that September day was difficult for us all, it also once again revealed the character of Maine people, whose outpouring of support sustained our small community through its most challenging moments,. Today, as we honor Captain Bell, the Farmington Fire Department, every day heroes like Larry Lord, and all of our first responders who put their lives on the line to keep us safe, let us recommit to taking care of one another in times of hardship as we did then, rising a stronger people and a stronger state.”
In response to the tradedy, LD 1892, “An Act To Make Changes to the So-called Dig Safe Law” sponsored by Rep. Seth Berry, D-Bowdoinham, was signed into law by Mills earlier this year, and requires liquefied propane gas distribution systems that have underground pipes be subject to the dig safe law, which prohibits digging around underground utility lines.