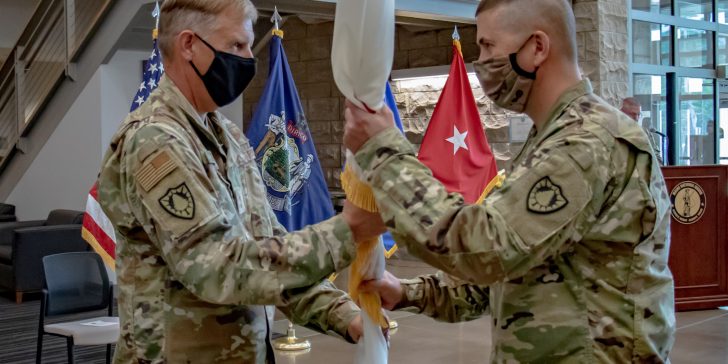 AUGUSTA — Command Sgt. Maj. Mark Smith turned over his responsibilities as state command sergeant major, the senior enlisted soldier in the Maine Army National Guard, to Command Sgt. Maj. Brian Dill in a June 5 ceremony.
Smith is retiring after 34 years of service.
“As I reflect on my career I have no regrets, serving my country and state over the past several years has been an honor and privilege,” said Smith. “The Maine Army National Guard has been a second family and has served me well during both high and low points throughout my service and life. The stories and experiences I have been part of will be shared around the campfire for many years.”

Smith, a Hermon resident, thanked members of his family for their steadfast support during his career, highlighting many of the sacrifices they have made, particularly during deployments. He offered individual praise for his many mentors over the years, and noted how some of the most difficult experiences at the time have yielded the best memories and friendships.
Beginning his career as a carpenter-mason, Smith later served as a construction engineer. He has held various unit leader positions throughout the Maine Army National Guard, and noted some of his fondest memories came from his time with Company A, 133rd Engineer Battalion. He also served as the first sergeant of the 1136th Transportation Company and command sergeant major of the 286th Combat Sustainment Support Battalion.
Smith deployed to Afghanistan in support of Operation Enduring Freedom during 2006-2007 as a construction management noncommissioned officer with the 240th Engineer Group, Combined Task Force Chamberlain. His awards include the Bronze Star Medal, Meritorious Service Medal and Army Commendation Medal. During the ceremony, he was presented with the Legion of Merit for his numerous career accomplishments, as well as a gift from sergeants major from several other northeastern states, many of whom were in attendance.
In a traditional ceremony, Dill received the Army flag from the adjutant general, Maj. Gen. Douglas Farnham, officially charging him with his responsibilities as the next state command sergeant major. Dill previously served as the command sergeant major for the 120th Regional Support Group in Bangor, for which he received the Meritorious Service Medal during the ceremony.
“It is a great honor and privilege to have the opportunity to be the 15th State Command Sergeant Major,” said Dill. “The Maine Army National Guard has earned the reputation for training and developing great leaders and prestigious units, and to be selected to lead the state into the ever-changing and challenging future as the senior noncommissioned officer adds to that honor.”
Dill thanked family and friends, laid out his vision for the organization, and discussed important lessons imparted on him during his service that have prepared him for the challenges that lie ahead. He discussed how the COVID-19 pandemic has forced the National Guard to think and operate outside traditional comfort zones, and has added to the resiliency of the organization.
A Fayette resident, Dill originally enlisted as a combat medic in the former 314th Ground Ambulance Company in Millinocket. Some of his previous leadership positions include service as the first sergeant for Westbrook’s 262nd Engineer Company, command sergeant major of the 133rd Engineer Battalion, and command sergeant major for the 52nd Troop Command in Augusta. During 2004-2005, he deployed to Iraq with Company B, 133rd Engineer Battalion. His awards include the Meritorious Service Medal, Army Commendation Medal, Bronze De Fleury Medal and the Combat Action Badge. He is also a former schoolteacher and coach.
Both soldiers’ partners were presented with a dozen roses, acknowledging the sacrifices made by military families, and thanking them for their past, present and future support. The ceremony culminated with the singing of the Army Song.