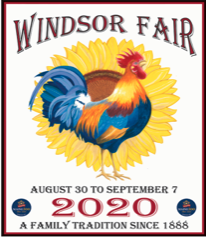 WINDSOR — Although the Windsor Fair will not be held this year, the Windsor Fair Poster Contest was held as usual. The contest began before the pandemic, and this year’s poster itheme was to incorporate and celebrate Maine’s Bicentennial.
The board of directors chose artwork by Keith Peters of Farmingdale. The sunflower was depicted on the fair’s first poster, and the blue and yellow crowing rooster “is perfect to celebrate Maine’s birthday,” noted Karen Foster, chairwoman.
“Growing up in central Maine, I took an early interest in art,” said Peters. “I developed a close kinship with the natural world as a child.” That kinship is the basis for his art, in which he develops images from the world around him, painting in watercolor, graphite and pen and ink.
Peters has a passion for creating highly detailed artwork of scenes from intimate corners of the Maine coast to well-worn objects found even in an old toolbox. Working in acrylic paints, he employs a bold color palette and a fluid, yet somewhat detailed, style to give images of beloved antique vehicles a presence that captures the essence of years gone by. Recent interests also include depicting birds, cityscapes, flora and even whimsical images of popular food items in acrylics.
After receiving a BFA in graphic design from the Maine College of Art in Portland, he studied illustration at the Rhode Island School of Design. His illustrations have appeared in several major magazines and regularly on billboards he designed for placement across southwestern United States. He now works in publishing, graphic design, writing and painting in his own home studio in Farmingdale, Maine
Posters and more information are available through the fair’s website — www.windsorfair.com