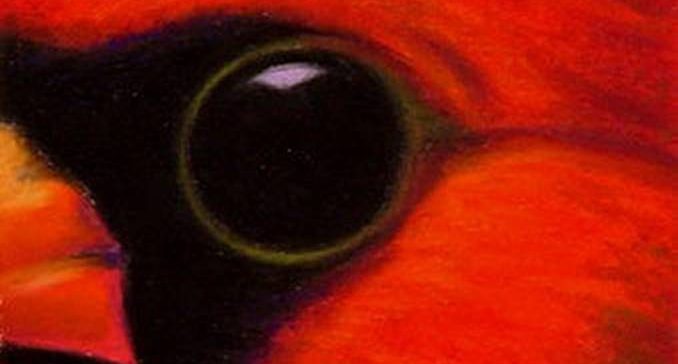 PORTLAND — The long-admired artwork of the Rev. Paul Plante is being featured online in an exhibition that serves as both a canvas of his immense talent and a tribute to his indelible legacy.
The work of Plante, who died in June o2016, has been featured in art galleries around the country and can now be seen on www.paulplante.com. His most famous work focuses on the eyes of songbirds, hawks, ducks and other birds in 4 ½” x 4 ½” oil pastel paintings. The paintings reflect his fascination with birds, their spirit and their furtive nature. His portfolio also includes fish, plums, apples, and more. The work is searchable by collection and category on the new website.
Visitors to the site will also have the chance to explore a few of the many other contributions made by Plante during his life. One section features his homilies, while another is dedicated to his professional experiences and even includes the words of the artist himself.
“I look at my artwork with the same awe that makes me wonder who I am as a person,” reads part of Plante’s writings. “In many ways, I’m discovering myself in my art. I also sometimes feel as though the depths of my being are exposed through my art. When the result in another person is joy or awe and wonder, it makes it all worthwhile.”
A Sanford native, Plante served as parochial vicar at St. Louis Church in Auburn (1971-1975), St. Joseph Church in Biddeford (1975-1976) and Holy Cross Church in Lewiston (1976-1985); parochial vicar as well as rector of the Cathedral of the Immaculate Conception in Portland (1985-1993); and pastor of St. John Church in Winslow (1993-2004) and Our Lady of the Lakes Parish in Oquossoc (2004-2016). In 2009, he was assigned as Vicar for Priests while remaining pastor of Our Lady of the Lakes.
The artwork is also available to buy, and, at the request of Plante, proceeds from any sales will be given to the Roman Catholic Diocese of Portland to be used for diocesan needs.

PHOTO: An examble of the artwork of the Rev. Paul Plante, that’s now featured in a new website. Plante served in Auburn, Lewiston, Winslow and Rangeley, among other places. (Submitted photo)