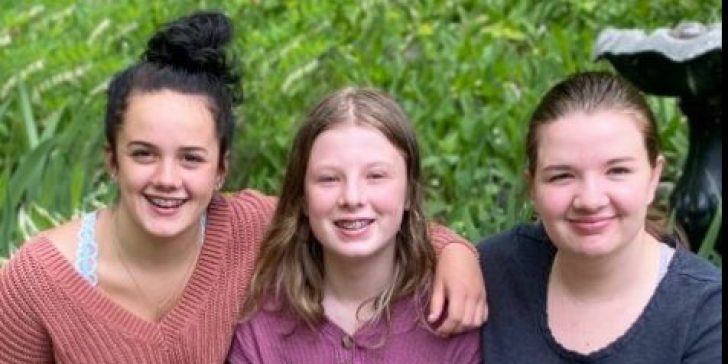 STRONG — Last month, 12 students from Strong Elementary School qualified for competition in the National History Day in Maine State Contest. Because of the circumstances surrounding this year’s event, the young historians were not able to showcase their work in person at the University of Maine as in years past, but submitted their projects virtually on May 2.
Wendy Morrill, Strong’s 5th grade teacher, who also teaches writing to students through grade 7, said, “The 12 Strong students who qualified for the NHD state competition did really great work, representing our district very well.
“Some really important topics were explored, such as the underground railroad in Maine, a famous female NASA engineer, and a man who fought for equality in marriage rights as far back as the 1970s.”
The entry by the team of Kalley Starbird, Riley Monahan and Nadia Davis earned second place in the Junior Group Website Team category and awaits judging at the national level. Their presentation, “Breaking Through Alcatraz,” took this year’s state history contest theme, “Breaking Barriers in History,” literally. As their subtitle explains, it told the story of “1962: The year common thieves masterminded the most notorious escape in history, (when) the three men broke ‘The Rock’ and redefined maximum security in the United States.”
Principal Brenda Dwiggins said the students were even able to secure a telephone interview with a woman who had been raised on Alcatraz and had written a book about it.
“This really speaks volumes to their love of learning,” Dwiggins said.
The National Contest will also be held virtually from June 14 to 20. The three students will get together to present their discoveries to judges via Zoom at a designated time during that week.
The other nine competitors from Strong Elementary were Junior Division Group Exhibit: Rita Baker, Aidyn Legere, and Eric St. Pierre, Group Exhibit (Harvey Milk: The Man Who Sought Equality); Junior Division Individual Exhibit: Kaylie Estabrook, Katherine Johnson, The Human Calculator; Senior/Junior Division Individual/Group: Adrianna Stinchfield, Kahlyn Wilkinson and Alyssa Sniadecki, (Ruby Bridges: The Girl Who Changed William Frantz Elementary); and Martha Morrill and Isabelle Danala (A Treacherous Journey: Maine’s Role in the Underground Railroad).
National History Day in Maine is a history education program for students in grades 6 to 12. Students choose their own topics related to a national theme, then use primary and secondary sources as they research their subject. Their findings may be presented as a traditional research paper, a museum-style exhibition, a 10-minute video or live performance, or a web-based collection of interactive pages.
The competition includes classroom evaluations, regional and state competitions, and then the national event. There are two levels of competition: Junior for students in grades 6 to- 8 and Senior for high school students. Projects are evaluated on historical quality, relation to theme and clarity of presentation. It is a year-long program organized by the University of Maine and the Margaret Chase Smith Library.

PHOTO: Kalley Starbird, Riley Monahan, and Nadia Davis, whose project came in second in their division in National History Day Maine State Challenge and will compete in the nation competition later this month. (Crystal Davis photo)