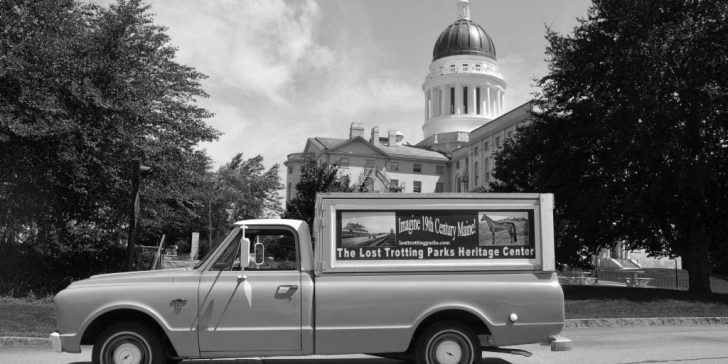 WINTHROP — Stephen Thompson will present “The History of the Horse in Kennebec County and the Story of Winthrop Messenger,” from 6 to 7 p.m. Thursday, June 11, hosted by the Winthrop Historical Society. Those interested in attending should contact Nick Perry at nperry@baileylibrary.org for the Zoom link. A short business meeting will follow. Thompson, who grew up in Limestone, is the founder of the Lost Trotting Parks Heritage Center, an online look at the history of the state’s trotting parks. He started his work researching Maine’s lost trotting parks in 2009 after his cousin, trotting historian Clark P. Thompson, of Bangor, published “Maine’s Trotting Horse Heritage Trail.” In his book, Clark identified 20 of Maine’s most historic stories, including Winthrop Messenger, a horse that, 200 years ago, began Maine’s trotting breed. Stephen Thompson attended Clark’s presentation of the Messenger stone in Winthrop in 2005. As Clark presented, Stephen recognized and felt his passion for his research and the historical contributions of the horse to the state. Stephen assisted Clark in his research of the North Kennebec Agricultural Fairgrounds in Waterville. It was when he stood upon the grounds of the former fairgrounds, now the back half of Pine Grove Cemetery, that he asked himself the question, “If this fairground is becoming a cemetery, what happened to other fairgrounds with trotting parks in the state of Maine?” this question led to his research and discovering that over the years more than 90 Maine communities supported trotting parks throughout Maine. Today, his work supports the Lost Trotting Parks Heritage Center, a registered nonprofit that has an online museum at losttrottingparks.com.
Earlier this year, the Lost Trotting Parks Heritage Center received a Maine 200 Grant for “The Maine Spirit and the Horse,” which will rebrand Maine’s Starting Gate Museum, which will be set up in the bed of a 1967 Chevy Pickup. It will presents 10 panels for display, as well as banners featuring maps of Maine from 1615 to present, maps of towns with trotting parks, the work of J.W. Thompson and his book, “Noted Maine Horses,” published in 1874, and other subjects of interest. The rebranded Starting Gate Museum will be set up at Maine fairs and other public events.
The grant also supported a website, themainespirit.blogspot.com, [1]which features the importance of memoir writing, and helps ensure Maine’s stories will ge told. For the last six years, Thompson has worked as the video patrol officer at seven agricultural fairs that feature harness racing. This work allowed him to take photographs in the paddock and before the first race. These photos are featured on his Facebook in photo albums. His Zoom presentation will also include the work of J.W. Thompson and his book, “Noted Maine Horses,” published in 1874. The presentation will also present images and stories of Kennebec County’s lost trotting parks. There is also a display on the topic at Pat’s Pizza, State Street, Augusta.