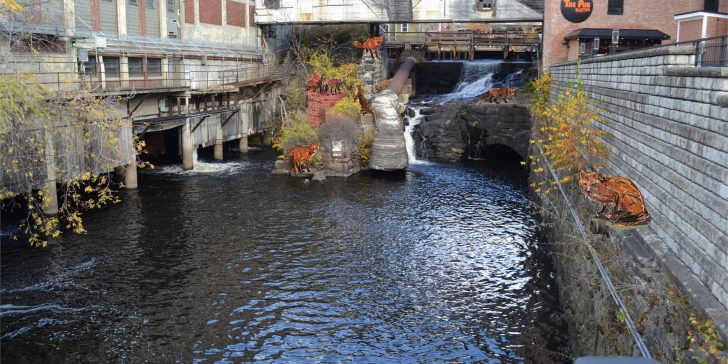 LEWISTON — An original work of art by artist and Auburn native Andy Rosen will be installed in the canal between Baxter Brewing and Bates Mill #5 the summer of 2021.
The Lewiston City Council recently approved the installation Life-like foxes will grace the area, part of a public art program spurred by a grant awarded to the Lewiston Auburn Metro Chamber of Commerce and LA Arts in 2019 to support public art as an ecomomic driver.
Rosen is best known in Maine for two installations in Casco Bay: “Unpack,” seven life-like dogs that Rosen created in 2015 and placed on the dilapidated pier on Portland’s eastern waterfront, and in 2018, “Tread” was installed, a pair of deer emerging from the rising sea near Ocean Gateway.
For Lewiston’s piece, Rosen is partnering with Morin Brick in Auburn to fabricate the material for the foxes that will form the installation “Ledgers.”
Working Group Co-chair Beckie Conrad said, “Being a site for Andy’s work is important to our community. Not only is he an Edward Little graduate who has gone on to become a respected artist, his work is also gaining national recognition and, as a result, will attract a wide audience, further supporting the intention of the grant.”
Mayor Mark Cayer said, “The grant program recognized that the economic contributions public art makes to local economies is vast. Siince public art is a magnet known to bring people to a community, we are excited to have Mr. Rosen’s work here in Lewiston as a continued example of our city’s vibrancy and positive vision for the future.”
“Research shows communities with widespread public art see a multiplier effect on the local economy. Public art gets people out and will continue to draw people into the LA region,” said Shanna Cox, president and CEO of the Chamber. “We are excited to be part of this effort which directly aligns with our mission to be part of an engine for economic vitality.”
Lewiston’s new public art piece resulted from collaboration by the Lewiston Auburn Metropolitan Chamber of Commerce, LA Arts, the local Public Art Working Group, and the cities of Lewiston and Auburn. At the end of the grant’s first year, in December 2019, the Lewiston City Council adopted a Public Art Plan that was drafted by the Public Art Working Group, which included the process to select and install art on public sites.
In early 2020, the Public Art Working Group completed a Call for Art to Maine artists that attracted 11 submissions from across the State. Four finalists were interviewed following review of their proposed installations. During the selection process, local high school students, Sophie Therrien, ELHS, and Jacob Morin, LHS, joined the committee and offered insight into what they believed would attract the attention of their generation as public art becomes part of the LA community. City representatives received the Working Group’s proposal for the final selection for Lewiston before City Council input and vote.

PHOTO: A replica of ‘Ledgers,’ by Auburn artist Andy Rosen, which will include seven sculptures of foxes in the mill canal next to Baxter Brewing in Lewiston. (Submitted photo)