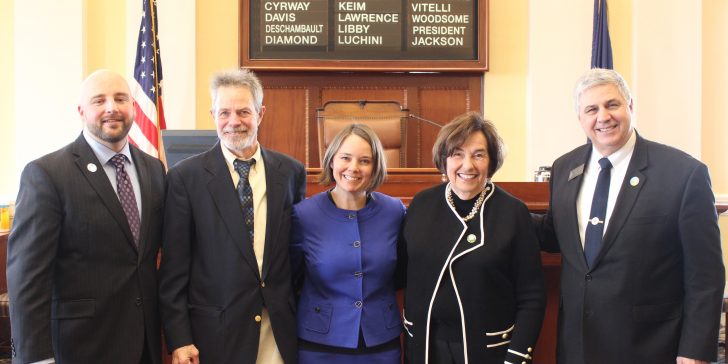 AUGUSTA — The Kennebec Historical Society has been honored by the Maine Legislature, which passed a joint resolution that cites its services to the public and growing membership.
The resolution marks the upcoming 130th anniversary of KHS, but was also submitted as a way for KHS to celebrate Maine’s 200th anniversary as a state.
Sens. Shenna Bellows, D-Manchester, and Matt Pouliot, R-Augusta, cosponsors of the resolution, both spoke in favor of the resolution before it passed unanimously in the Senate on March 10. It also passed in the House two days later.
“When I reflect on the work of the Kennebec Historical Society from its founding by a small group of committed citizens in 1891 to the active band of over 500 members today, I am inspired by the organization for their contributions to our county, our capital and our state for over a century,” Bellows said before Senate passage.
“The role of Kennebec Historical Society is to provide opportunities for us to look back at our history and taking a leadership role as we celebrate Maine’s bicentennial,” Bellows said.
The resolution coincides with the society’s action to extend one-year Bicentennial Honorary memberships to all 186 Maine House and Senate members and Gov. Janet T. Mills. It also recognizes the KHS “as a repository of tens of thousands of historical manuscripts, photographs, scrapbooks, maps, postcards and other ephemera about Kennebec County and elsewhere that are not available in other archives.”