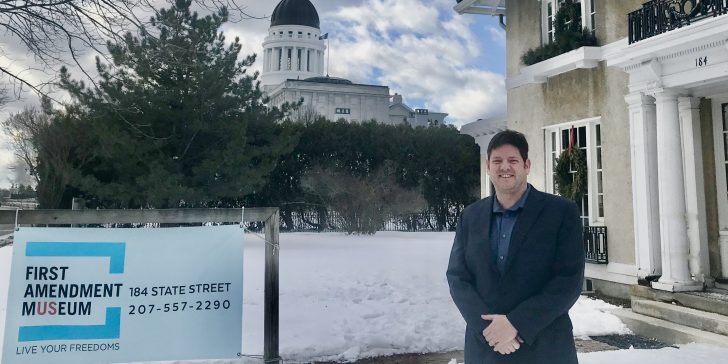 AUGUSTA — The First Amendment Museum in Augusta, Maine as announced the appointment of Christian J. Cotz as chief executive officer.
Cotz brings 25 years of museum experience and a deep knowledge of the First Amendment to Maine, having worked in leadership positions at James Madison’s Montpelier in central Virginia for the last two decades. Cotz will guide the First Amendment Museum through the next stages of its development – building staff, completing the restoration of the historic structure, construction of the museum addition, and developing and installing exciting and relevant exhibitions in the space.
“We are confident Christian’s experience in the museum field will allow us to speed up the pace of the project and bring new energy and ideas and partners to the table,” said Genie Gannett, Board Chair of the museum.
The First Amendment Museum is in the historic former home of publisher Guy Gannett on State Street in Augusta. Gannett founded Guy Gannett Publishing Company in 1921. A champion of the free press, Gannett once wrote, “I have never regarded the newspaper as a piece of private property to be managed for mercenary ends; but rather as an institution to be managed for the public good, and to be made a force in the community for the promotion of the welfare of our city, state, section, and nation.”
The home changed hands in the early 1970s to house the state Planning Office. The state vacated the building in 2010, and the museum bought the building in 2016 and has made steady progress on the architectural restoration of the historic building, on designs for an addition, and on the concept design for the exhibition.
“My sister, Terry Hopkins, and I can’t think of a more fitting way to honor grandfather’s memory than by turning his home into a museum that promotes First Amendment freedoms. He would have liked that,” said Genie Gannett, Guy’s granddaughter, and, with her sister, co-founder of the museum.
At Montpelier from 2000-2019, Cotz took part in the transformation and restoration of the home of America’s four president and Father of the Constitution, Madison. “There are a lot of parallels between the two places,” said Cotz. “When I started at Montpelier, we had a house that needed to be restored, both Madison and Montpelier were largely unheard of, we had very few visitors, and no money. But we had incredible aspirations. This project will be another exciting challenge.”
The First Amendment Museum is being developed as a conceptual museum about how the First Amendment affects our lives and how we use the rights it protects, Cotz said. “It will be current and relevant.”
Cotz’s wife, Amy Larrabee Cotz, is a native of Belfast, and is a historian and associate editor of the Dolley Madison Digital Edition at the University of Virginia. She and their two daughters, Ava and Aria, will join Cotz in Maine in June. They are looking forward to spending the summer at the family’s camp on a lake not far from the museum.
“I’ve been coming to Maine with Amy every summer for almost 20 years,” said Cotz. “Moving here permanently feels like coming home.”

PHOTO: Chris Cotz, the CEO of the First Amendment Museum, in front of the museum, 184 State St., Augusta. (Submitted photo)