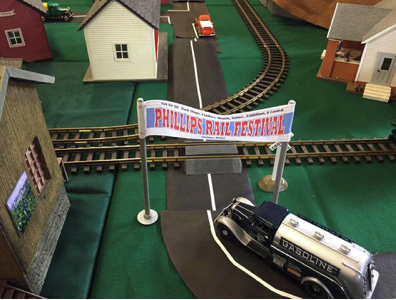 PHILLIPS — The annual Model Train & Hobby Fair was held Sept. 28 at the old Sandy River & Rangeley Lakes Railroad machine shop — now the Phillips Community Center — on Depot Street.
Rail Fest is a free-of-charge celebration of the history of Phillips and Franklin County during the age of steam and includes hobbyist workshops on improving model railroad layout such as improving trees and placement, carving and painting rock, and using selective compression and forced perspective. ; organizers Pam Matthews and Dan Welch orchestrated the event
A presentation on the heyday of the Rangeley Lake House highlighted a time when Rangeley was the playground of the rich and famous and when rail was the best way to get there. Participants learned what it was that made people flock to Rangeley in a time before airplanes, cell phones and hot water.
Rail Fest was a day filled with railroad history, including video footage of the Sandy River and Edaville Railroads projected onto the big screen on the Community Center’s stage; the Sandy River & Rangelely Lakes Railroad trains ran every hour from Sanders Station. Tours of the Vose House provided an opportunity to view exhibits of the Phillips Historical Society — including the “Railroad Room” filled with artifacts and photos from the SR&RL Railroad. There also were vendors selling everything from used and antique train sets, to books about local lore. Art Shean spent hours assembling his model train set, which consisted of scale models of several landmarks of the region, running two engines simultaneously around a track that occupies about one quarter of the spacious building.
Several other free events coincided to make this an exceptional experience. Local mechanic and auto-enthusiast Andy Phillips, members of Rod and Kustom Kruisers of Maine, and many others displayed antique autos at the old round house just outside the building on Depot Street.
“The thing that gets me,” said Phillips, “is all the different cars, trucks and even an antique motorcycle that show up — anything from the 1930s all the way up to the 70s. But the best part is being able to visit with everyone. And we’re not always talking about mechanical things.”
For the many who spent several hours at the event, American Legion Post 64 members (in their neighboring building) grilled hamburgers and sold hot dishes and soda over lunch. Meanwhile, the Phillips Farmer’s Market celebrated its final day of the season with a raffle basket, breakfast treats from local bakers and the last chance to get this season’s plants and vegetables.
For more information about the SR&RLR, call 207-639-2380.