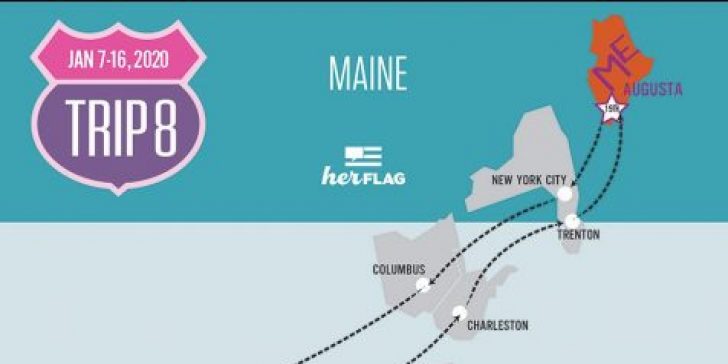 AUGUSTA — Oklahoma-based artist Marilyn Artus will visit the Maine State Museum at 1 p.m. Saturday, Jan. 11 as part of her nationwide Her Flag project.
The event will also include a performance by Maine songwriter Jenny Lou Drew and appearance by Maine artist Amie Kennedy. The museum will be open free of charge all day. The performances and appearances are also free.
Artus will arrive at the museum with her sewing machine, as she has at sites in 18 other state capitals since June. Once inside the museum, she will sew a stripe that represents Maine, the 19th of 36 states that ratified the 19th amendment, on a large art flag. The stripe signifying Maine has been created by Maine artist Amie Kennedy, who will also appear at the event. While Artus is sewing on the Maine stripe, Drew will perform.
Artus is travelling to each of the 36 states in the order that they ratified the 19th amendment, which gave women the right to vote.. She began in Wisconsin on June 10. Her visit to Maine is the eighth of 17 road trips that will end in Tennessee on Aug. 18.
“I am on a mission to make sure that every woman I come in contact with over this 14-month adventure is registered to vote and gets out in 2020 to put that registration to use,” said Artus. “‘Her Flag’ is not a political piece of work, rather a powerful, positive symbol used to educate and celebrate this truly momentous American anniversary.”
When it is complete in November, “Her Flag” will measure 18 feet tall and 26 feet wide and will include the work of 36 women artists across the nation.
For more information, visit www.herflag.com. For more information about the Maine State Museum, the Jan. 11 event, and the museum’s exhibit, “Women’s Long Road – 100 Years to the Vote,” visit www.mainestatemuseum.org