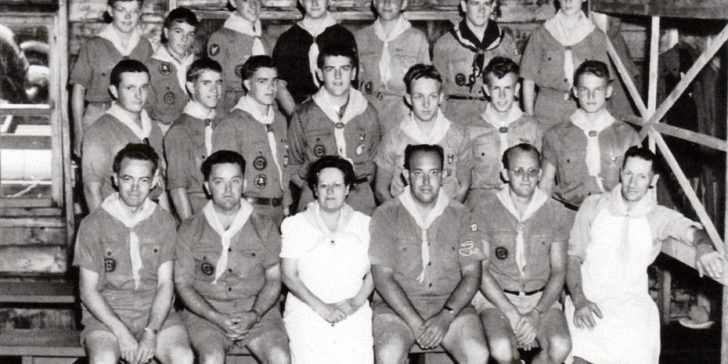 BELGRADE — Camp Bomazeen- the Scout camp on Great Pond, will celebrate its 75th anniversary in 2020.
In 1945, Camp Bomazeen opened to provide an adventure for Maine Scouts in an idyllic setting. Over the course of the past 75 years, thousands of Cub Scouts, Boy Scouts, Explorers and Venturers have camped amongst the pines, learned new skills, made lifelong friendship, and challenged themselves.
As the Kennebec Valley District, Bomazeen Old Timers and Pine Tree Council prepare for the diamond anniversary, they are asking the public’s help in collecting photos, articles, letters, memorabilia nd more.
“We want to tell the story of Bomazeen,” said Camp Historian Chuck Mahaleris, of Augusta. “We want to boldly prepare for the next 75 years by first recognizing the efforts of those who came before us and laid the foundations for the camp we love.
The selection committe that founded Bomazeen included “visionaries” Frederick W Johnson, of Colby College; George Averill, of Waterville; William Hinman, of Skowhegan; J.R. Cianchette and William Springler, both of Pittsfield; Henry Hall, of Madison; and Lewis J Rosenthal, of Waterville, Mahaleris said. The camp was named by 14-year old Waterville Scout Richard Chamberlain.
“Last summer, both boys and girls shot arrows at the Bomazeen archery range, made baskets at Bushcraft, learned to swim at the waterfront and some even learned how to weld,” he said. “I hope those great pioneers would be proud that the camp they started is still serving youth today.”
Those who have items to submit can contact Mahaleris at cmahaleris@gmail.com or 207-400-9850. All items submitted will be scanned and returned. Donations will also becaccepted for display during the anniversary season.

PHOTO: Camp Bomazeen staff in 1945, the year it was founded. (Submitted photo)