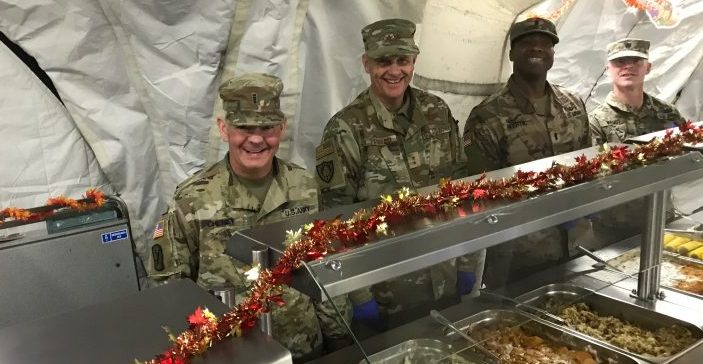 POWIDZ, POLAND — Maj. Gen. Douglas Farnham, the adjutant general of the Maine National Guard, paid a holiday visit to the 286th Combat Sustainment Support Battalion last week. The unit is deployed in support of Operation Atlantic Resolve.
“The most important thing I can say is thank you,” said Farnham, addressing the unit. “We all know when we put the uniform on that there will be times spent away from family, to include the holidays, but that doesn’t make it any less difficult. Thank you for all the hard work you’ve put in. We’ve enjoyed hearing about your successes thus far, and we look forward to welcoming you all home soon.”
Farnham was accompanied by Command Sgt. Maj. Mark Smith, his senior Army enlisted advisor, and Chief Warrant Officer 4 David Cheney, the command chief warrant officer. During the visit the command team served Thanksgiving dinner, toured the base, received a mission update brief, presented command coins to standout performers and cheered on the 286th in the base’s Turkey Bowl flag football playoff.
“We felt very strongly about putting this visit together,” Smith said, regarding the importance of the trip. “The soldiers of the 286th knew when they went out the door that they would not be home for the holiday season, but they also knew they had a job to do. It’s fitting that we as leaders acknowledge theirs and their families’ sacrifice by being here to spend some time with them, serve them, and thank them for their service.”
The mission of Atlantic Resolve is to build readiness, increase interoperability and enhance bonds between ally and partner militaries with multinational training events in Bulgaria, Estonia, Hungary, Latvia, Lithuania, Poland and Romania. U.S.-based units have been supporting Atlantic Resolve in nine-month rotations since 2014.
The 286th deployed in the spring of 2019 and is expected to begin redeployment to Maine during the winter of 2020.