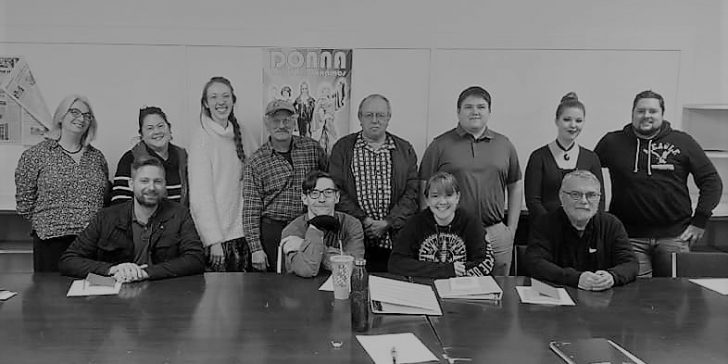 AUBURN — Community Little Theatre has announced the cast for the Philip Barry classic “The Philadelphia Story.” The play will be performed at the theater, on Academy Street, Jan. 17 through 26.
The witty, sophisticated comedy is a breezy and romantic story which explores family dynamics, class prejudice and human frailty. The 1940 movie starred Cary Grant, Katherine Hepburn and Jimmy Stewart.
The story surrounds the wealthy and well-established Lord family of 1930’s Philadelphia, which is about to welcome the cream of society into their home for the second wedding of Tracy Lord, the strong and vibrant daughter of the house, to George Kittredge, a proudly priggish up-and-coming self made coal mine manager — much to the annoyance of little sister Dinah, big brother Sandy, and ex-husband C.K. Dexter Haven, none of whom believe that George is good enough for Tracy.
Unfortunately, father Seth’s philandering with a Broadway dancer causes a scandal which an unscrupulous media tycoon threatens to break — unless he can send a reporter to cover this high society wedding from the inside. Enter Macaulay “Mike” Connor, a writer of quality unwillingly slumming it on the society beat and his faithful photographer Liz, whose romantic connection is not enough to stop the fascinating dance that ensues when Tracy and Mike meet and spar over class boundaries while both the worse for champagne. Torn between three men, Tracy must determine whether or not she belongs on a pedestal.
The role of Tracy Lord will be performed by Emily Grotz; Jason Pelletier, who will undertake the ex – or maybe not so ex – husband CK Dexter Haven; David Moyse will play Macauley “Mike” Connor, the reporter who gets more story than he bargained for; Nathan White will be the uptight social climbing fiancé George Kittredge. Megan Record will portray Liz, Mike’s sidekick photographer (and hopeful love interest). Anita Charles and Mark Hazard will appear as Tracy’s parents, Margaret and Seth Lord. Jim McKinley will appearas the irascible Uncle Willy. Tracy’s siblings Sandy and Dinah will be portrayed by Ben Simpson and Sophie Bourget. Rounding out the cast will be Mike Farrell as Mac the Night Watchman and Dr. Parsons; David Ouellette as Thomas the butler; and Leslie Buot as Elsie May the maid.
The Philadelphia Story opens Friday, Jan. 17, and performances will also be held Jan. 18, 19, 23, 24, 25 and 26. Evening performances are at 7:3 p.m. and Sunday matinees are at 2 p.m. For ticket or other information, visit www.LACLT.com or call the box office at 207-783-0958.

PHOTO: The cast of the Community Little Theatre’s ‘The Philadelphia Story.’ (Submitted photo)