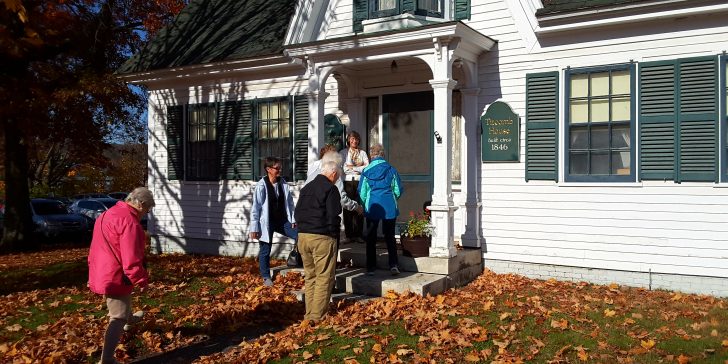 If you’re the nostalgic type and love the idea of transporting yourself back in time to the late 1800s and early 1900s, I know first-hand where you can experience a bit of the past.
My husband and I recently boarded a chartered bus for a “Mystery Trip,” sponsored by the Cushnoc Seniors Club in Augusta.
The trip took months to coordinate, as it was a first of its kind for our destination’s town historians as well as trip coordinator Terri Cloutier, vice president of the club.
We were in for a day of sunshine, mild temperatures and a landscape that still offered us the splendor of the majestic canvass of fall colors.Once we had passed the apple orchards in Manchester, the suspense of waiting was over, as it was announced that Farmington was our destination for the day.

Activities would include a walking tour of Farmington and a warm welcome at four of Farmington’s beautifully maintained historical buildings listed on the Register of Historic Properties. Our day would include a home-cooked meal served by the local historical society’s auxiliary.
We met our consummate historian from Farmington as we approached the town line, and together we all took a step back into the past.
We learned the Farmington Historical Society, a not-for-profit organization, was founded in 1961 for the purpose of preserving the rich cultural heritage of the town.
As we left our chartered bus for the day, we were led into the North Church, built-in 1873, where we met several guides and historians who would lead us in groups on our walk back in time.
We left on foot for the first attraction — the Octagon House — a design very popular during that period. The house was designed and built by a local brick maker, who loved the concept that all rooms could be accessed through a doorway without leaving the perimeter of the outside walls. Then, to add to its attraction, all doorways leading to a common corridor with a semi-circular stairway designed to act as a natural funnel in drawing the heat from the downstairs rooms to the upstairs bedrooms.
As we were on the walking tour of Farmington, society member Jane Woodman explained how a spark ignited at a railroad station back in 1886 had leveled most of Farmington’s downtown area and how its restoration was carefully planned to replicate its original design and appearance.
Farmington is also well known as the birthplace of the earmuffs. In 1873, Chester Underwood designed the earmuffs in anticipation that they would keep his ears warm, and therefore he could enjoy skating longer into the evening. Just a teenager at the time, Underwood reaped the reward of his invention as he delighted in wearing them and skating into the evening to his heart’s content.
As the society prepares for the upcoming holidays, the detail members of use in decorating both the interior and exterior of their historic buildings transports one back to a beautiful period of time when ladies wore lovely hand-sewn, floor-length satin dresses and gentlemen dressed in their finest.
This tour transports visitors to a time period when family gatherings included singing and playing the piano in the music room for after-dinner entertainment. It was a time when savory recipes, prepared from the kitchen pantries, are taken out once a year in celebration of the season, filling each house with aromas of Christmas past.
The best was saved for last as lunch, served by the members of Farmington’s historical society, included no fewer than seven homemade soups, slices of fresh bread and desserts — a fantastic end to a beautiful day.