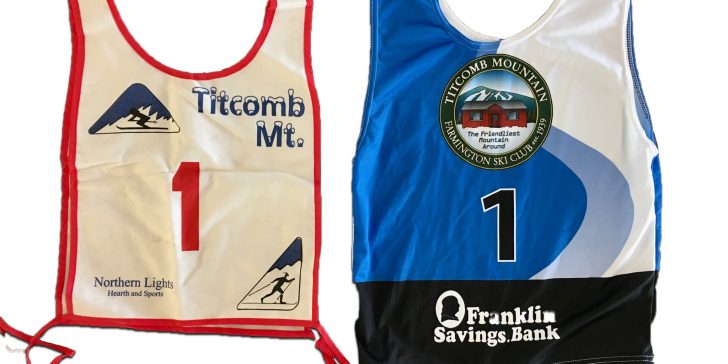 FARMINGTON — The Farmington Area Ski Team will soar downhill this year wearing new bibs, bought for the team by Franklin Savings Bank.
The youth ski team had been using the same ski bibs for many years, and the bibs were nearing the end of their life.
“Titcomb’s last set of bibs was purchased a little over 20 years ago. Within that time, the style of bibs and their overall use has changed dramatically,” said Titcomb Mountain General Manager Seth Noonkester. “The original bibs were purchased primarily for the two youth races we hosted at that time but recently we’ve had to use them for all races hosted at Titcomb Mountain.”
Noonkester noted the bibs experience constant wear and tear from race to race and even begin to disappear over time. “Titcomb Mountain is so thankful for Franklin Savings Bank supporting the Farmington Ski Club in the purchase of new bibs to cater to the variety of events we’ve hosted in recent years,” he added.
The new bibs will make their debut at the USSA Dual Slalom in January, followed by the USSA Wes Marco Night Slalom in March and the Maine Principals Association Class A,B,C Nordic High School Championships during February break.
FAST is coached by Nate Yeaton and Monica Clark; its season will begin Saturday, Dec. 2, for students in grades 4 through 8. Titcomb will open for the season offering space for many ski programs and teams Saturday, Dec. 14.