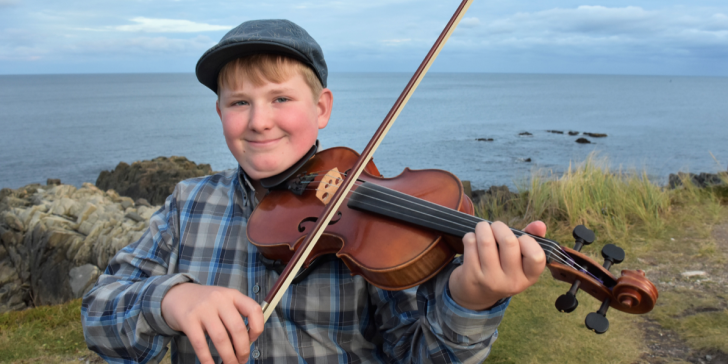 WINTHROP — St. Andrew’s Episcopal Church will celebrate St. Andrew’s Day Saturday, Nov. 30, with a free concert of Celtic music performed by Owen Kennedy, a 14 year-old fiddler from Winthrop whose love of traditional music and enthusiasm for performing has captivated audiences from Cape Breton to San Diego to the Shetland Islands and all over Maine.
Owen began playing the violin at 4 years old as a Pineland Suzuki School student, learning music by ear. His first violin was a box with ruler stuck in it “played” with a wooden dowel rod. He continues to study classical violin with Betsy Kobayashi and is a member of several chamber and orchestral ensembles. However, his first love is fiddling, which he began at the age of 7 with Ellen Gawler.
Though young, Owen is a seasoned performer. He entertained at the Boys & Girls Club Board of Directors dinner, kicking off their national conference in San Diego before an audience of several thousand. He performed solo at The Big Gig, the final Shetland Folk Frenzy concert. He has opened for Pete’s Posse and an Acadia Trad Festival concert in Bar Harbor, and has shared the stage with Natalie MacMaster & Donnell Leahy, The Outside Track, Genticorum, and Andrea Beaton & Troy MacGillivray.
Whether jamming with friends, playing with the Pineland Fiddlers, the Maine Folque Co-op or the Young Tradition Vermont Touring Group, performing solo, or offering music at church and retirement communities, Owen’s love of sharing fiddle tunes charms the audience with his artistry, authenticity and infectious grin.
Fans can follow his musical journey on his website, www.fiddlerokennedy.com, or on Facebook, YouTube, and Instagram as @fiddlerokennedy.
The concert will be held at the Friends Meeting House, which St. Andrew’s Episcopal Church shares with the Winthrop Friends meetings, 219 Winthrop Center Road. (Route 135), one mile south of U.S. Route. 202.
An after-the-concert feast will focus on traditional Scottish delicacies, including meat and vegetarian haggis, mash, applesauce, scones, shortbread and “Irn-Bru” — a Scottish carbonated soft drink.
For more information about the concert or the venue, call 207-395-2015 or email the Rev. Susan Berry Taylor at ammaTaylorSt.Andrews@gmail.com.