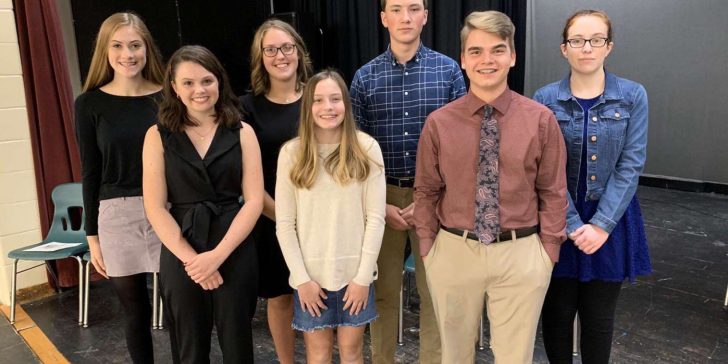 JAY — Three sophomores, three juniors and one senior at Spruce Mountain High School took the National Honor Society pledge to maintain high scholastic standing, hold an untarnished character, endeavor to be a leader, and give freely in the service of others.
Chapter President Riley Gray led the induction ceremony. She reported on the activities of the Spruce Mountain chapter, including harvesting more than 30 pounds of vegetables over the summer solely for the local food pantry as well as organizing and cleaning the clothing closet at school that helps students who are in need. Upcoming volunteer activities will be helping at the Jake Lord Play It Safe fundraiser in November, caroling at the nursing home during the holiday season, and volunteering at the Special Olympic Games in the spring.
Gray introduced the guest speaker, Bob Berry, owner and operator of Main-Land Development Consultants in Livermore Falls. Berry serves on the board of directors for the Jay-Livermore – Livermore Falls Chamber of Commerce, the Franklin County Chamber of Commerce, and the Greater Franklin Development Council. He lives with his wife Lisa and three sons in Jay.
Berry asked for audience participation in answering, “What do you think is the most important attribute to employers?” Audience answers included character, showing up on time, and doing your best. His answer focused on an attitude of being perpetually positive. “Employers prefer and promote attitudes of positivity,” Berry said. “Customers buy from positive people. It’s healthier because positive people have less stress.”
Berry listed 10 ways to become and stay positive. He encouraged students to limit negative influencers in their lives and surround themselves with positive influencers. Another item on his list was to smile a lot. “Smile so much some people think you’re creepy,” he advised. “It will change your attitude and the attitude of those around you. It’s irrelevant whether or not anyone is holding you down if you blow right by them with a smile on your face. Be positive! You only get one chance at this life. You might as well enjoy it!”
After Berry’s remarks, current members explained the four pillars of the National Honor Society. Adria Plourde described scholarship; Annabelle Collins read about service; Kayla Adams explained leadership; Abigail Thurston described character.
Then came the moment everyone was waiting for. A current NHS member called each inductee to the stage by reading a brief biography of the inductee, who then signed the chapter list. After all were present on the stage, Gray administered the National Honor Society pledge.
The inductees included senior Katelynn Ladd; juniors Hannah Coates, Drew Delaney and Sara Henderson; and sophomores Matthew Fenlason, Courtney Hogan and Ella Plourde. Principal T. J. Plourde presented pins and certificates to each inductee. He concluded the ceremony with “I feel I should recognize parents, grandparents and other family members. It’s the positive attitude that you provide that helps these students reach their goals.”
Family and friends joined the new NHS members for congratulations, pictures and refreshments.