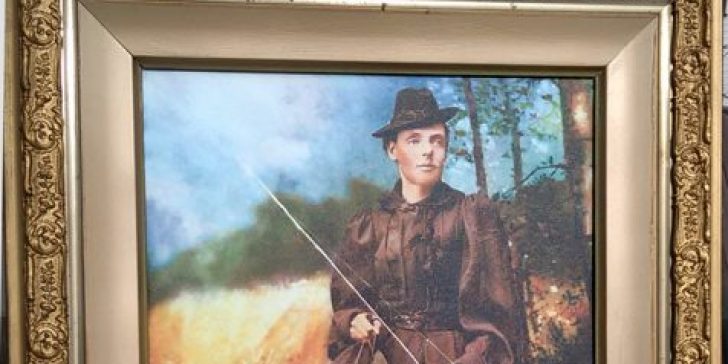 MONMOUTH — Pam Matthews, author of children’s book, “Cornelia ‘Fly Rod’ Crosby, Champion of Maine,” will speak at Cumston Library, 3:30 p.m. Sunday, Sept. 29.
The talk is free and open to the public. Matthews will be dressed as Crosby might have dressed in the 1890s. She is a resident of Phillips, Crosby’s birthplace. The book is illustrated by Portland artist Heidi Kendrick, and was designed and printed in Maine. Always interested in history, Matthews learned about Crosby, and realized that a simple illustrated book about one of Maine’s most influential and interesting women could teach children about this heroine.
Crosby perhaps did more to promote her beloved state than anyone in history. She was and avid outdoors enthusiast and widely published columnist who advocated for the registration of Maine’s Guides and would go on to receive Maine Guide badge 1. An angler and hunter, Crosbya wrote extensively about her adventures around Rangeley and Oquossoc, as well as other parts of Maine.
Though she struggled with lifelong illness as well as a knee injury received in a train accident, she was still able to excel in a man’s world, and brought many women into the outdoor sporting life by her example. Crosby was inducted into the Maine Women’s Hall of Fame two years ago. For more information, call 207-933 4788 or email friendsofcumstonlibraryfocl@gamil.com.