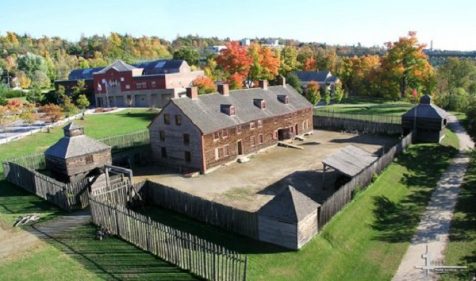 AUGUSTA — Fort Western and the Lincoln County Historical Association will kick off Maine’s Bicentennial celebrations with a lecture series in three parts.
The first part includes six talks in September and October that will provide insights to life in Maine from pre-history to the 17th century. The second part, in May and June of 2020, will discuss the effects of the French and Indian Wars and the resettlement of Maine along the Kennebec River. The third part, in September and October of 2020, will cover the period of statehood, the Civil War, and the rise and fall of industries in Maine.
Part One of the series, “13,000 years of Maine History from Native American to European Contact,” will take place Sunday afternoons from 1 to 3 p.m. at Wiscasset Middle High School, 272 Gardiner Road, Wiscasset.
The schedule of the first set of talks is as follows:
Sept. 15 — Arthur Spiess, senior archaeologist for the Maine Historic Preservation Commission will kick off the series with a talk, “Maine Native Americans: An Archaeological Perspective Covering 13,000 years of Native American History in Maine.”
Sept. 22 — Orman Hines, a vocational archaeologist who has worked on the Popham Colony and is the former president of Maine’s First Ship reconstruction project will speak on the building and reconstruction of the pinnace Virginia_,_ Popham Colony’s major success.
Sept. 29 — James E. Franci, Jr. director and tribal historian of the Penobscot Nation will talk about the 17th century Maine from the Wabanaki perspective.
Oct. 6 — Emerson Baker, professor of history at Salem State University and author will speak on the English settlement of Maine in the 17th century.
Oct. 13 — Mike Dekker, author and living historian, along with Mark Roman, living historian, will talk about the French and Indian Wars in Maine.
Oct. 20 — Ken Hamilton, living historian, will talk about Maine and Acadien privateers during King Williams War.
The Lincoln County Historical Association is a nonprofit organization that provides stewardship for the 1754 Chapman-Hall House in Damariscotta, the 1761 Pownalborough Court House in Dresden, and the 1811 Old Jail and Museum in Wiscasset. For information visit www.lincolncountyhistory.org or Facebook at Lincoln County Historical Association and Pownalborough Court House Museum.
Fort Western is not for profit organization whose mission is to preserve, protect and interpret the National Historical Landmark, Fort, Store and House on the Kennebec River in Augusta. For information call Fort Western at 207-626-2385 or email oldfort@oldfortwestern.org.