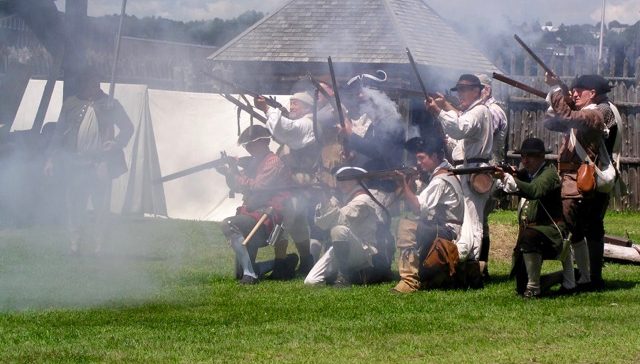 AUGUSTA — The James Howard’s Company, Re-enactors of Fort Western, will host a French & Indian War encampment from 10:30 a.m. to 3:30 p.m. on Saturday, Aug. 24, and from 10:30 a.m. to 2 p.m. Sunday, Aug. 25.
Fort Western is on the east bank of the Kennebec River, across the river from downtown.
Re-enactors will portray the garrison of Fort Western during the year 1758, a year when the soldiers were fearful of attack, and bitter because of their long enlistments at the lonely and isolated fort. On Saturday, there will be musket firing demonstrations from 10:30 a.m. to noon. During the afternoon, the soldiers will be on the parade ground learning and practicing ranger and light infantry woods fighting techniques.
On Sunday morning, starting at 10:30 a.m., the public is invited to join in the soldiers’ worship service. Following the service, the re-enactors will practice woods fighting techniques at Viles Arboretum on Hospital Street. The public is invited to join the woods walk. The Howard Company will break camp at 2 p.m.
During the encampment, visitors are invited to walk through the fort, store and house to view period rooms and exhibits and talk with historical costumed interpreters about daily life in the 18th century. Admission is $10, $6 for children between 6 and 14, $8 for seniors and veterans, $25 maximum for faimlies.
Augusta residents and active military are admitted free of charge. The fort’s hours are 10 a.m. to 4 pm. daily until September, when it’s open Friday through Monday.
Fort Western, built in 1754, is America’s oldest surviving wooden French & Indian War garrison. For more information, visit www.oldfortwestern.org or call 207-626-2385 or email oldfort@oldfortwestern.org.