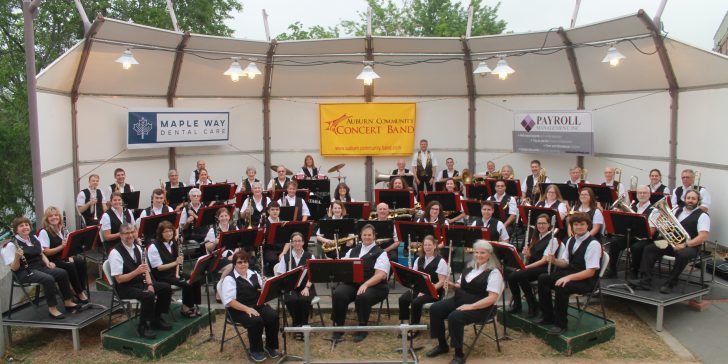 AUBURN –The Auburn Community Concert Band will hold rehearsals for its upcoming holiday concert season beginning Wednesday, Sept. 11. This is an ideal opportunity for former high school and college band members to experience the enjoyment of performing regularly in front of large audiences.
The Auburn band has a particular need for additional people who play clarinet, flute, alto sax or French horn. Membership requires a commitment to the group’s weekly schedule of Wednesday evening rehearsals and concerts; members must also provide their own instruments.
Weekly rehearsals take place from 7 to 9 p.m. at High Street Congregational Church, between High and Pleasant streets at 106 Pleasant St.
The group’s annual holiday concert this year is scheduled for Wednesday, Dec. 18, at the Gendron Franco Center in Lewiston. Last year’s performance attracted an audience of nearly 450 people. Additional Wednesday evening performances will also occur during December.
Currently, the ACCB has 48 members, ranging in age from 14 to 89, representing 16 Maine towns. Before joining this organization, many of the group’s volunteer musicians had last played in a school or community band some 20 to 30 years ago, according to band director Milt Simon. “New members are often nervous when they first join, because of the lapse of time since they last practiced,” he said, adding “most players regain their playing skills relatively quickly.”
Prospective members unable to participate in any of the September rehearsals will have a second opportunity to join the band during the group’s “Open Membership Month” in January.
The concert band is currently celebrating its 38th season. The organization was founded by Simon in 1981. For more information, interested musicians should call Simon at 207-782-3917, or visit the band’s website at www.auburncommunityband.com.