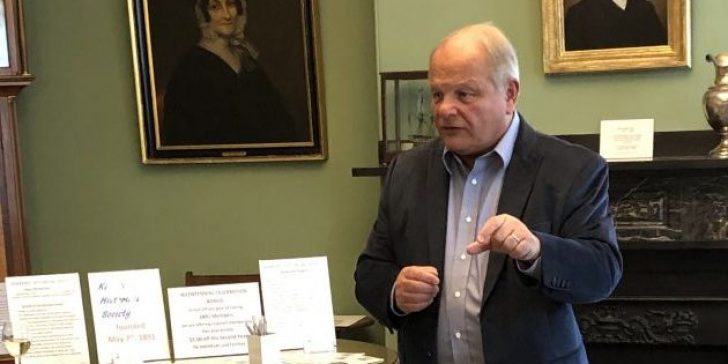 AUGUSTA — Visits by the tall ships to Maine coastal towns and cities, community gatherings across the state and a reintroduction of Eastern white pines are among the activities and events that will help Maine celebrate its 200th anniversary, state Archivist David Cheever said at a May 18 meeting of the Kennebec Historical Society.
Cheever, who is vice chair of the Maine Bicentennial Commission, was guest speaker as the organization held a wine and cheese gathering to expand its membership. KHS President Patsy Crockett also announced the nonprofit group’s goal of expanding its 500-plus membership to 1,891, a number corresponding to the year KHS was founded.
A flotilla of tall ships from several countries will be a centerpiece of the celebration of Maine’s 200th anniversary of statehood, Cheever told KHS members and guests at the group’s headquarters. Visits to several coastal ports in addition to Portland are also envisioned.
A reintroduction of Eastern white pines, the grand trees that were once a staple of the British navy and became symbolic of the state’s growth, is also planned. The bicentennial commission is encouraging community gatherings, such as covered dish suppers, throughout the bicentennial year to draw Mainers together in celebration.
Bicentennial celebrations will begin July 26, the 200th anniversary of the day when voters approved Maine’s secession from Massachusetts. Official statehood happened March 15, 1820.