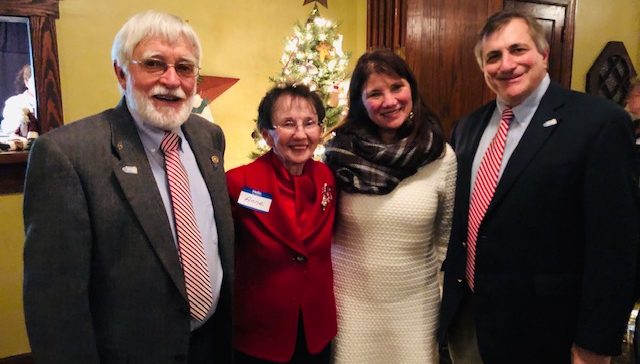 RUMFORD — Two River Valley Rotarians were honored recently with recognition through the Paul Harris Society, which recognizes individuals who contribute, or who have contributions made in their name, of $1,000 to The Rotary Foundation of Rotary International.

Joe Sirois, who has received more than 10 over the years, was issued yet another Paul Harris recognition, because of his committed to the Paul Harris Foundation.
Randall Therrien, a Key Bank manager, also received a Paul Harris recognition from Rich Allen, a fellow Rotarian. The honor allowing Allen to bestow the award to Therrien came from Tim Placey, fellow Rotarian and past district governor, who was able to offer this distinction to Allen, a deserving Rotarian, past club president and dedicated community volunteer.
Placey, through his own efforts in the organization, accumulates so many Paul Harris honors he can either accept a Paul Harris Recognition, give it to another Rotarian or grant another fellow Rotarian the honor of presenting those point to someone deemed worthy. He granted the honor to bestow those points to Allen, who chose Therrien to be the honoree.
Historically, Rotary began with the vision of one man — Paul Harris, a Chicago attorney — who formed the Rotary Club of Chicago in 1905, so professionals with diverse backgrounds could exchange ideas, form meaningful, lifelong friendships and give back to their communities.
The Paul Harris Fellow program recognizes individuals who contribute, or who have contributions made in their name, of $1,000 to The Rotary Foundation of Rotary International. The honor was established in 1957 to show appreciation for contributions that support the annual fund, PolioPlus, or an approved foundation grant.

PHOTO: From left, Joe Sirois and his wife Ann, along with visitors Sue Lobosco and her husband, District Governor John LoBosco, from Cape Elizabeth. (Submitted photo)