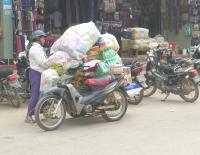 My first surprise was that a Buddhist monk in Myanmar speaks enough English to carry on a conversation. Imagine how astonished I was when he pulled a smartphone from his robe and showed photographs of his recent trip to Japan.

Among the most memorable features we encountered in Myanmar were the people. Itineraries planned by Myths and Mountains, the company with which my wife and I traveled, provide many opportunities for personal encounters. For example, a high point of our trip occurred when the monk invited us to lunch at his monastery.
Another was crossing paths with members of the 135 nationalities who comprise the country’s population. The people of each group cling proudly to their distinctive dialect, way of dress and traditions.
Some of them are among employees of small workshops who turn out products that are as beautiful as they are useful. They put in long hours often for wages in the $3 to $5 a day range. We visited a shoemaker and silversmith, workshops for textiles and teak furniture, and shops where people cast bronze and carve wood.
A different scene awaits visitors to the ubiquitous outdoor markets that fill sidewalks and streets in cities, towns and villages These are good places to meet and mingle with colorfully attired members of minority groups, some of whom are there to sell and others to buy.
Sidewalks are blanketed by vendor stalls, and streets are clogged with locals doing their shopping. Items are displayed on rickety stands and tiny tables and in some cases spread out on the pavement. Clothing may be next to flowers and near parts of animals, some of which were unidentifiable to me. Goods displayed range from cooking oil to curry powder, fish to fowl, beads to baskets, inspected by passers-by and, occasionally, purchased.
Many of the daily tasks that working people in Myanmar face are labor-intensive. We saw a man who spent a full day cutting a lawn at a resort with a hedge trimmer, a task that could have been completed in an hour or so with a power mower. We observed young men who wield heavy hammers for hours on end to pound slabs of gold into paper-thin leaf. We watched in awe as women toiling at road repair project carried large heavy rocks balanced on their head.
Contrasting with lifestyles that in many ways have varied little over time, vestiges of change also are evident throughout Myanmar. In cities, tiny dilapidated shacks stand near shops that sell Armani, Rolex and other upscale merchandise. Streets are clogged by motor scooters, some carrying two adults and up to three small children, and trucks laden with unbelievably large loads.
White and golden pagodas, which are as plentiful as the golden arches in the U.S., glow with flashing multi-hued neon lights and strings of colored bulbs. Some pagoda complexes have elevators and escalators for worshippers and visitors who can’t, or won’t, climb long flights of stairs.
Another sight was countless monks in saffron-colored robes and people everywhere bowing before Buddha images that look down upon them > throughout the country.
Some of the most interesting and intriguing places were the villages, where people in many ways live much as their forebears did. Simple houses made of intertwined bamboo line narrow dusty lanes. Dogs, chickens and other animals wander free, in a constant search for food.
In contrast to those scenes, even in the tiniest and most isolated hamlets are cellphones, which are as common as in any major U.S. city. Children of all ages use a smartphone to play games and adults of all ages to talk and text.
Myanmar will long linger with us.

PHOTOS: Some of the sights writer Victor Block and his wife saw on trip to Myanmar included people carrying loads on motorbikes. (Victor Block photo)