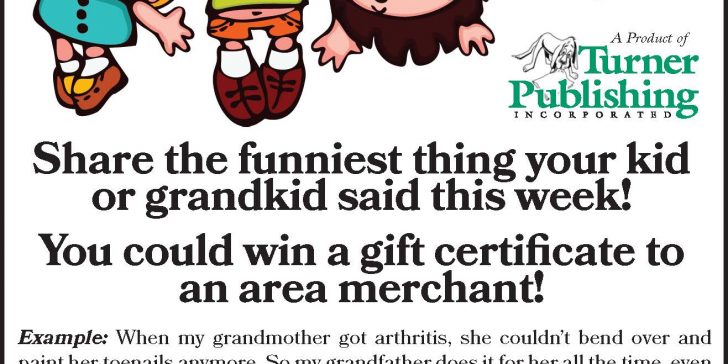 TURNER – Turner Publishing Inc. has been sharing funny stories submitted by readers and the column, titled “Funny Things Kids Say,” has been popular with our readers. We would like to share your funny story, too. Randomly we select names from among the Funny Things submissions and give away gift certificates to local restaurants to the winners. You can enter as many funny things as you want, but each entry must be emailed separately or mailed separately. Here are some submissions we received in 2016:

My 3-year-old grandson had just started Sunday school. I was making lunch and we were going on the deck. I told my grandson to close the door. He thought for a minute and said, “Let God do it.”
He had learned that God was everywhere and can do anything. – Dorothy Pooler in Winslow.

I was in my room watching TV when my 5-year-old grand-daughter Jocelynn walked in the room.
“What are you watching, Nana?” she asked.
I replied, “M.A.S.H.” to which she asked, “Is that a cooking show?” – Donna Dalton in Jay.

When she was 11 years old, my granddaughter Becca and I went to the library. It was closed. When we got home I checked the calendar and told her it was closed because it was Patriots Day. She said, “They must’ve had a big game!” – Grammy in Gardiner.

We look forward to reading these submissions each week. Thanks!