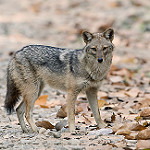 As former Maine deer biologist Gerry Lavigne reported recently in the Sportsman’s Alliance of Maine news, there has been a flurry of media coverage purporting that Maine’s Eastern coyote is getting larger and taking on more wolf-like characteristics. On TV, Bill Green’s Outdoors featured a segment, and the Portland Press Herald carried a story by Diedre Fleming.

Is it true? Is our coyote, which started showing up in the 1940s, evolving into a new canid, one worthy of the new, catchy name — coywolf?
Lavigne makes a compelling case that some of the Maine media, and the animal protectionists, are up to their old tricks, refusing to let the facts get in the way of a good story — or a politically-planned ploy.
There are a number of animal rights activists, including a geneticist, who have actually petitioned to have the scientific name of the Eastern coyote changed from Canis latans, to Canis oriens. This is a first step, according to Lavigne, to get the Maine coyote protected federally under the Endangered Species Act.
When it comes to Eastern coyotes, Lavigne is a scientist and a scholar who, as a career deer biologist, has studied these wild canids and their interrelationship with deer for years. Responding to the geneticist’s assertion that the wolf component in Maine’s eastern coyote gene pool may be increasing, Lavigne says “That is patently absurd.”
Depending upon which study you read, Eastern coyotes have always contained 8% to 30 % wolf DNA going back to the 1940s. Lavigne says that has not changed in decades. He backs up his case with ironclad data. Between 1970 and 1990, body weights of hundreds of coyotes from Maine, Quebec, Ontario, New Brunswick and Nova Scotia averaged 34.1 lbs. for males and 29.7 lbs. for females. This data covered all age classes. Lavigne’s own weight study of 131 coyotes last year showed the weights were identical to weight averages taken of Eastern coyotes in Maine more than a decade ago!
There is more. The coywolf adherents would have you believe the shopworn, but disproven, animal protectionists’ refrain — that coyotes live solely on rodents, bugs and fruit, and they don’t kill deer. Fact: In the Northeast, venison comprises up to 80% of a coyote’s winter diet.
Of course, the end game in this coywolf ploy is to use the Endangered Species Act to shut down the population control of Maine coyotes by the state and recreational trappers and hunters. Because wolves are far more popular and romanticized than coyotes, the coywolf proponents have a public relations advantage, the facts notwithstanding.
What we could have is a repeat of the Canada Lynx narrative — a game-changing, legal and regulatory quagmire haunting us even today.
_The author is editor of the “Northwoods Sporting Journal.” He is also a Maine guide and host of a weekly radio program — “Maine Outdoors” — heard Sundays at 7 p.m. on “The Voice of Maine News – Talk Network.” He has authored three books; online purchase information is available at www.maineoutdoorpublications.com._