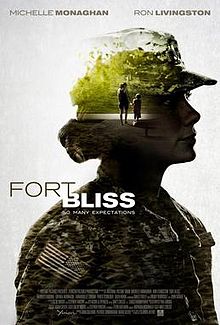 AUBURN — The Auburn Public Library welcomes Rob Reilly, director of programming for Camp Kieve’s Veterans Camp, Thursday, May 11, at 6 p.m., to lead discussions at the library’s showing of the 2014 film “Fort Bliss.”

The movie tells the story of a decorated U.S. Army medic and single mother who struggles to rebuild her relationship with her young son after returning home from an extended tour in Afghanistan.

Since 2010, Reilly has led the Camp Kieve Veteran’s Camp program in Nobleboro, which offers family, Vietnam, and women-veterans-only camps for those who have experienced the stress of deployment during past and current conflicts. Reilly’s discussion will focus on the challenges women veterans in particular face upon returning home.

The library is pleased to present this program, the first of three examining the legacy of WWI made possible through a grant from the Library of America and National Endowment for the Humanities to commemorate the 100th anniversary of the nation’s entry into the war in 1917. The programs are designed to bring together members of the veteran community, their families and the general public to explore how war has impacted lives. Authors, historians, veteran advocates, and veterans will lead discussions and share their experiences with audience members.

On May 18 at 6 p.m., Richard Rubin, author of “The Last of the Doughboys” and the soon-to-be released “Back Over There,” will share from his interviews conducted with WWI veterans as the audience looks at how combat changes lives. Veterans and their families are encouraged to share their stories of how war has impacted them personally.

All events are free and open to the public, and will be presented in the community room on the library’s lower level, 49 Spring St. For more information, please visit www.auburnpubliclibrary.org or call 207-333-6640.