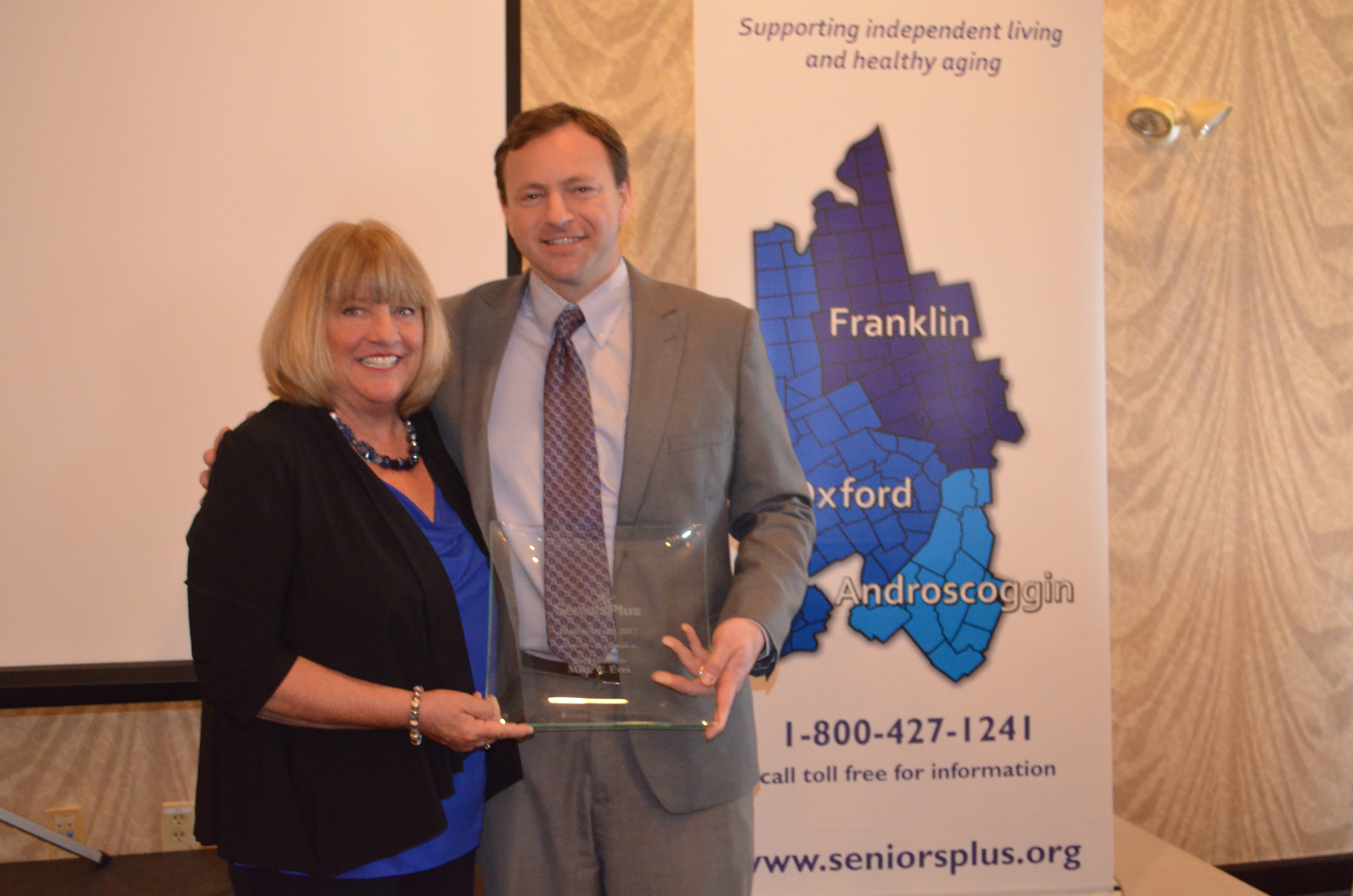 AUBURN — Former Speaker of the Maine House of Representatives Mark W. Eves was honored at the annual “Fill the Plate Breakfast” March 31 as recipient of the 2017 Ikaria Award bestowed by SeniorsPlus, the designated Agency on Aging for Western Maine. The Ikaria Award — named for a Greek island in the Aegean Sea considered one of the world’s five “Blue Zones” where an estimated one in three members of the population regularly lives an active life into their 90s — honors an individual in the community for singular and outstanding contributions toward improving the lives of older adults. The breakfast benefited Meals on Wheels of SeniorsPlus, and was held at the Hilton Garden Inn Riverwatch. Nearly 200 people attended the event, which raised more than $6,000 for Meals on Wheels.

As Speaker of the House, Eves was responsible for presiding over all actions of the House of Representatives. Under his leadership, the Legislature passed a bipartisan middle class tax cut, boosted property tax relief for all Maine families, and strengthened investment in Maine children and workers. In the 127th Legislature, he served as co-chair of the first ever Caucus on Aging, pushing an agenda to support Maine seniors to live independently in their homes and communities.

“Mark Eves worked hard to put the needs of Maine’s older adults in the forefront of the legislative agenda. His legacy continues,” said Betsy Sawyer-Manter, president and CEO of SeniorsPlus. “It was a pleasure to honor him with the 2017 Ikaria Award.”

Maine Attorney General Janet T. Mills was the featured speaker at the breakfast. Mills offered personal and professional recollections of her experiences engaging with older adults. The attorney general is Maine’s chief law enforcement officer and represents the state in legal matters ranging from child support enforcement, civil rights and consumer protection to the prosecution of homicides, felony drug cases and major frauds. Mills was an Assistant Attorney General from 1976 to 1980, prosecuting homicides and other major crimes. In December 2008 she was elected by the Joint Convention of the Legislature to be Maine’s 55th attorney general — the first female attorney general in Maine. During a hiatus in office, from 2011 through 2012, Mills taught criminal law at the University of Maine Augusta and served as counsel in the Litigation Group of PretiFlaherty, LLP. In December 2012, Mills was again elected attorney general, and in December 2014 she was re-elected to her second consecutive term.

The “Fill the Plate Breakfast” is presented in conjunction with March for Meals, a national campaign of the Meals on Wheels Association of America.

Last year, SeniorsPlus delivered 108,000 meals to more than 750 homebound older adults and adults with disabilities in Androscoggin, Franklin and Oxford counties through its Meals on Wheels program. Almost 600 volunteers donate more than 28,000 hours to the program annually. Each meal provides one third of the recommended daily allowance of nutrition, a safety check, and a visit to these vulnerable adults. The majority of the consumers of Meals on Wheels are lower income or on fixed income.
“We seek funding through this breakfast to avoid waiting lists and to help fund the program,” said Sawyer-Manter. Currently, the wait list for the Meals on Wheels program at SeniorsPlus has 75 individuals on it.

The overall program goal of SeniorsPlus is to assist older adults and adults with disabilities in the tri-county area to remain at home safely for as long as possible. The overwhelming majority of older adults (greater than 95% in an AARP survey) wish to remain at home until they die. The Meals on Wheels program provides nourishment, socialization, and regular safety checks.

The mission of SeniorsPlus is “to enrich the lives of seniors and adults with disabilities.” SeniorsPlus believes in supporting the independence, dignity and quality of life of those it serves. Established in 1972, SeniorsPlus covers Androscoggin, Franklin, and Oxford counties and serves more than 12,000 individuals annually. The agency focuses on older adults, adults with disabilities, and families and offers a network of support, including information and assistance, short-term care management, Medicare counseling, caregiver support and respite, health and wellness education, Options Counseling, Meals on Wheels and congregate dining.

PHOTO:
Betsy Sawyer-Manter, president and CEO of SeniorsPlus, presents former Speaker of the Maine House of Representatives Mark W. Eves with the 2017 Ikaria Award for outstanding contributions toward improving the lives of older adults.The event took place at the “Fill the Plate Breakfast” to benefit Meals on Wheels at SeniorsPlus. (Submitted photo)