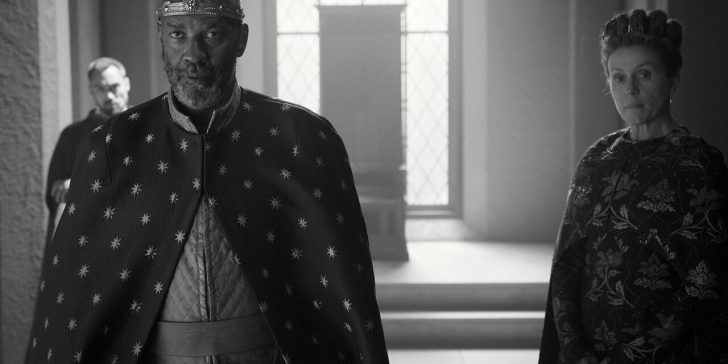 “It is a tale, told by an idiot, full of sound and fury, signifying nothing.” Often cited as the Scottish play, William Shakespeare’s “Macbeth” continues to fascinate literature students and fans of cursed histories. Though it had many filmed versions in the past, the latest adaptation, “The Tragedy of Macbeth,” attempts to simplify the story while bringing a new sense of style to this 17th century production. It’s the first solo writing and directing work of Joel Coen after years of building an oddball and eclectic filmography with brother Ethan.
On their way back from battle, Scotland’s Thane of Glamis Macbeth (Denzel Washington) and his friend Banquo (Bertie Carvel) come across three witches (Kathryn Hunter) prophesizing that one day Macbeth will be king. Later, King Duncan (Brendan Gleeson) awards the old prince the title of Thane of Cawdor, which then prompts Macbeth to desire something greater. After his wife, Lady Macbeth (Frances McDormand), begs him to get rid of Duncan and take the crown by any means necessary, Macbeth murders Duncan during the night and assumes the role as the king of Scotland.
But with more power comes paranoia and corruption as Macbeth finds himself haunted by his decisions. His wife’s her mental health declines while her husband prepares for war. To stay in power, Macbeth commits more extreme acts, like murdering the family of his rival Macduff (Corey Hawkins).
For those wondering, this adaptation condenses the original play as much as it can. No viewer will end up getting bored by the dialogue spoken by American actors. The more heavily ardent Shakespeare fan, however, will end up feeling disappointed by the way this film treats the material. They’ll likely cry foul at the severe lack of English actors commanding the screen though this is Coen’s original vision on its own terms. On the upside, this adaptation feels more accessible to those learning Shakespeare in high school.
The visual front is where this movie shines the most. It has that ambitious, golden-age filmmaking style with heavy noir elements giving the film a sense of uneasiness. Each of the shots seems to draw inspiration from German Expressionistic cinema of the 1920s seen in films like The Cabinet of Dr. Caligari and Nosferatu with lights and shadows going in twisted directions. It helps to represent the increased craziness experienced by the main characters. Both the cinematography and the CG-infused production design also helps to represent Shakespeare at his darkest and diabolical.
The real takeaway from this film is how the American actors handle the difficult dialogue with ease. Having done Shakespeare previously in Kenneth Branagh’s “Much Ado About Nothing,” in 1993, Washington chews the scenery pretty well expressing his character’s growing insanity like an aggressive hound dog. He and McDormand get to bounce off one another with added cruelty and spice. It’s especially scary watching the actress recite the classic “out, damn spot” scene. Special mention goes to Hunter also going the extra creepy playing the three witches like Gollum times three.
Shakespeare fan or not, there’s something to like about “The Tragedy of Macbeth” beyond simply an adaptation. The technical ambition and great acting from the leads certainly brings the whole thing together. Not to mention, it certainly feels less of a curse than any stage production of this story.
THE MOVIE’S RATING: R (for violence)
THE CRITIC’S RATING: 3.25 Stars (Out of Four)